I am a firm believer in the power of the National Health Service to render unto a country that is in the midst of depression a beacon of hope, light and whatever the third thing is. 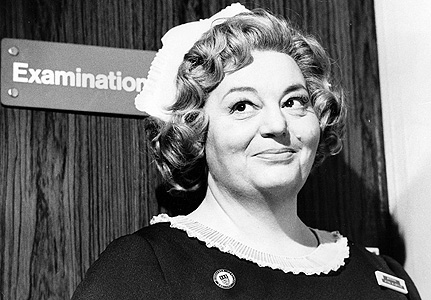 Over a million people work in the NHS; that’s nearly the population of Birmingham. And the work they do sets a standard for the rest of the world to follow. Foreign people look to our sceptre’d isle and see a race of happy, healthy humans going about our daily bustle safe and secure in the knowledge that the NHS is caring for them – From The Cradle To The Grave.

If Stafford General and Tameside General and, whilst we’re about it, Lincoln are anything to go by our caring NHS is doing its utmost to shepherd us to our graves as early and as cost-effectively as it possibly can. And why is this?

Because, gentle reader, roughly a third of the million or so caring people who care for us so much in the caring NHS aren’t actually healthcare professionals.

We bask in the caring glory of an NHS where the previous regime spent £30 billion a year additional to the £100 billion budget it inherited on a bunch of cadaverous, lemon-sucking incompetents and assigned them the task of managing the targets for the NHS. The target they now have to manage is saving the NHS £5 billion a year. Which they are attempting to do by crimping the £11 billion-a-year drug budget.

Ah-HA!!! I hear you cry. But that’s all about to change, isn’t it. We’ve got rid of PCTs and we’re going to get CCGs. Isn’t that super?

Now the problem with PCTs was that they were infested with useless people with one-dimensional brains making decisions about providing healthcare to a complex population by cutting their drugs. ‘Cos they couldn’t think of anything else to do. They were remote, disconnected, arrogant, unintelligent and costly.

Now we have CCGs. They have brought provision and prescribing under one roof thus removing the disconnection, the remoteness and…. And what?

They are run by the cast-offs from the PCTs (except for the people the GPs didn’t like – they’ve got nicely stabbed and chucked in the nearest ditch and good riddance to them!) and they are run by GPs. Who were given a thumping pay rise so large that the BMA negotiators literally left the room laughing in disbelief. And who only work four half-days a week. It’s easier to get hold of the local consultant.

But there’s worse to come.

Whereas before the noisome PCTs would interfere with every clinical decision and gaily ignore whatever NICE approved and evangelically apply whatever edict from NICE that involved not allowing a treatment, the chain of command was pretty simple. Department of Health, NHS Executive, PCTs, Doctors.

Now, in the more streamlined NHS, the CCGs are at the hub of a wheel of quangos and quangos-that-serve-quangos all proliferating like bacteria in agar jelly. In short, the legions of the ungodly have found something new to do and they’re back in business!

None of these management / procurement / value-based pricing / care quality / patient watchdog / cost monitoring / clinical senate wonks see any patients. Or do any bloody good whatsoever. They are there to make sure that nothing goes wrong. In much the same way that men have nipples just in case we have a baby.

And since the exigencies of the NHS of late have been due entirely to these educationally sub-normal cretins getting in the way of the People Who Know What They’re Doing, they have revealed themselves to be as much use as a periscope on a helicopter. But you can’t sack them; it would be far too expensive. They have contracts that entitle them to pay-offs that Sir Fred Goodwin would wince at and the country can’t afford it anyway.

So – because I hate whinging quarterwits who do nothing except complain and offer no solutions – I would like to proffer my solution.

Send them all home. Keep them on full salary for the rest of their lives and given them nothing to do. Ever!

We’d save a fortune on the buildings, the heating and the postage cost; they’d never come up with brilliant ‘initiatives’ that would cost a King’s Ransom and involve the engagement of another 20,000 brain donors; they’d never leave your granny on a stretcher in an A&E corridor; they’d not have a procurement officer who’d sub-contract the procurement to a procurement contractor who then procures rubber gloves from nine different suppliers  (which happened in South London).

All they’d do is acquire an horrendous infection from sitting watching daytime telly for too long and die in a pool of their own urine and vomit.

Automation is key in cell and gene therapy manufacturing
Reimagining the life sciences beyond COVID-19
COVID-19: A data challenge and a catalyst for new insights