Danielle Barron outlines how these stakeholder partnerships are shaking up the market. 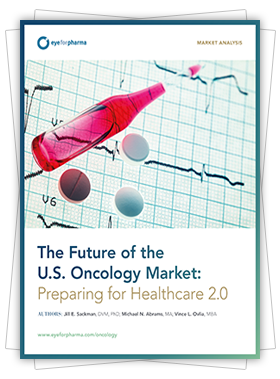 The recently published eyeforpharma whitepaper “The Future of the U.S. Oncology Market: Preparing for Healthcare 2.0” explored the changing landscape of cancer care in the United States, as it becomes clear that the need to realize value and the quest for optimal patient outcomes are no longer mutually exclusive.

The paper explains that, historically, the pivotal role of private insurers has meant that manufacturers in the U.S. have been held to a “less-demanding reimbursement standard”.

While there are still some unique forces at play in the U.S market, including the recently passed Affordable Care Act (ACA), differences between developed markets are being erased, and oncology is no longer afforded the “special” status it once was when it comes to payers footing the bill for expensive treatment regimes.

“As such, manufacturers should expect oncology to be treated by payers no differently than other diseases, especially with the arrival of key generics and biosimilars,” explains the whitepaper.

For example, following the passing of the ACA, although it opens up affordable care for previously uninsured patients, there are concerns that limits may be placed on access to novel therapeutics. New definitions and standards for medical necessity are feared, as the use of formularies grows within oncology.

“These external pressures are causing healthcare providers to identify ways in which they can evolve to meet the needs of the evolving market. One of the ways in which they are choosing to do so is via consolidation and collaboration,” the paper asserts.

According to the whitepaper, consolidation in healthcare is having significant implications for manufacturers selling into the delivery sector.

“With respect to purchasing power, fewer, larger health systems increase the leverage of buyers with all suppliers, including pharmaceutical companies. Beyond that, the integration of insurers with delivery organizations potentially increases the power of administrative perspectives in purchasing decisions relative to clinical perspectives. The likely consequence of this is accelerated pricing pressure,” it asserts.

Large-scale consolidation also poses a threat to product adoption; as treatment decisions historically made at the physician-level are institutionalized through evidence-based care paths, the management’s role is “growing at the expense of clinicians”.

“Enterprise-level senior executives and hospital administrators increasingly are making decisions about what drugs will be on the formulary, and which will not,” the paper advises.

Providers, like payers, are beginning to seek evidence of a product’s economic and clinical value in a bid to justify its cost. Hospital administrators, under increased pressure to control costs and justify reimbursement rates, will rely on published evidence as well as the experience of their clinical teams to determine a product’s value.

"The Future of the US Oncology Market" explains that this will mean a more rigorous assessment of drugs that are included in oncology treatment protocols and oncologists are becoming less shy about expressing their doubts about newer costly therapies with limited treatment benefits.

In an unprecedented step, oncologists at Memorial Sloan-Kettering Cancer Center (MSKCC) announced in the New York Times that they had decided not to include Sanofi’s Zaltrap in their treatment protocols because it wasn’t worth the cost. They explained that the available data indicated that Zaltrap was no better at extending life than the product currently used, Avastin, yet it cost more than twice as much (an average of $11,063 per month for Zaltrap vs. about $5,000 per month for Avastin). Their bold actions eventually led to a 50 per cent reduction in the price of Zaltrap.

According to the whitepaper, this drive for value has extended to Pharmacy Benefit Managers (PBMs), like Express Scripts and CVS/Caremark, who have been getting involved. In 2015, Express Scripts will exclude 66 brand-name drugs from its main formulary, while CVS will exclude 95. This represents an increase over the number of exclusions in 2014.

Their high cost may mean that oncology products are next for the chop – of the 33 oncolytics introduced since 2010 cost $10,000 or more per month, and all cost more than $5,000 per month.

With the increasing focus on cost of care, one of the biggest “curve benders” is the growth of high-deductible health plans that force consumers to be better shoppers of healthcare.

Manufacturers should take note of this fast-evolving market, as potential consolidation creates new, commercially-savvy entities to deal with – unless manufacturers choose to enter into this market themselves".

The paper outlines how the use of retail clinics continues to expand in oncology, largely in response to a rapidly-growing market for alternative-site infusion centers. Leading pharmacy retailers as well as non-traditional entrants, such as the St. Louis-based Schnucks grocery chain, are making their mark. The omnipresent Walgreens currently has more than 1,600 clinicians offering infusion services to patients in their homes and at care centers, the paper notes.

“Manufacturers should take note of this fast-evolving market, as potential consolidation creates new, commercially-savvy entities to deal with – unless manufacturers choose to enter into this market themselves,” is the advice given by the authors of the whitepaper.

Health futurist and medical economist Jeffrey Bauer, Ph.D, has written at length about how U.S. healthcare is in a major state of flux – he believes the next 45 years will see dramatic changes take place

“We’re going to go through an incredible period of disequilibrium and readjustment,” he said in a plenary session at the American Academy of Dermatology summer meeting last year.

“It’s going to be several years of real ups and downs.”

According to Bauer, the “one size-fits-all” clinical paradigm is fast disappearing as a result of the ongoing endeavors to develop and provide precision medicine. He says that cost-effective care will be achieved through personalized, preventive medicine that matches therapies to each patient’s specific disease characteristics.

It is also Bauer’s belief that that “those who build care teams will do better” as the site of care continues to shift from hospital to clinic, pharmacy, worksite, and home, and care teams that extend physicians’ reach with nonphysician practitioners will become the best-practices delivery model.

“The real key, if you want to be the 40 per cent that survives or the 25 per cent that thrives, is to recognize the value of care teams,” Bauer told the meeting.

He added that physicians need to position themselves to transition from fee-for-service reimbursement to bundled and value-based payment. According to Bauer, patients simply don’t have the disposable income to pay more for care, and this is forcing providers to rationalize pricing. The concept that future successes will be based on multi-stakeholder partnerships comprised of purchasers, payers, practitioners, and providers must be embarked, he asserted.

Oncology is not immune to the ever-increasing role of technology and “Big Data”.

The whitepaper outlines how one important aspect of the ACA is its mandate for improvements in the way clinical data is exchanged and transmitted to electronic health records (EHRs). It explains that health IT (HIT) expansion, along with a proliferation of provider alliances, M&As, and partnerships, is promoting the collection and use of big data.

In a landmark move, IBM has joined with WellPoint and MSKCC to train a supercomputer to process and interpret oncology data. According to Dr Harlan Levine, Executive Vice President for Comprehensive Health Solutions at WellPoint, such technology “will bring the best clinical information about effectiveness to the doctor’s office… [and] empowers the doctor with the collective knowledge of the oncology community.”

In tandem with the growing adoption of EHRs, new and unique opportunities for manufacturers to collaborate with both providers and payers will present themselves. Optum Labs, a joint collaboration between the Mayo Clinic and United Healthcare,  is one example –  this initiative aims to bring together vast arrays of clinical and claims data from the two organizations. Through its Claims Linked Registry for Oncology, Optum provides linked medical records and claims data for breast and lung cancer patients in the U.S.; now Pfizer and Merck have announced official partnerships with Optum.

Dr. Patrick Soon-Shiong, CEO of NantHealth, in collaboration with Blackberry, recently announced the release of the NantOmics Cancer Genome Browser, the world’s first clinical genome browser. This groundbreaking approach leverages data from a plethora of sources – including a patient’s own genetic information – and the cloud-based, big data platform enables physicians to create personalized treatment protocols, tailored to the unique genetic profile of a patient’s particular cancer. The platform also allows physicians to track patients remotely to ensure compliance with medication.

These examples are surely only the first of many such collaborations.

Back to the future

"The Future of the Oncology Market" iterates how manufacturers in oncology are currently facing a number of internal and external barriers to traditional premium pricing and market success in the U.S. Because of greater market power by providers as well as tougher measures by payers and PBMs to moderate the utilization of higher cost products, manufacturers in oncology are increasingly at risk for lower sales, slower uptake, and squeezed profit margins. With costs growing across the board, the financial assumptions that underlie the rush to oncology bear a second look, if not revision. Going forward, manufacturers in oncology must be prepared to move beyond old business models to ensure success in the marketplace.

This also applies to oncologists. In an article entitled “The Just Price of Cancer Drugs and the Growing Cost of Cancer Care: Oncologists Need to Be Part of the Solution”, Dr David G. Pfister, of the Head and Neck Oncology Service and Committee on Metrics of Care Quality and Outcomes at Memorial Sloan-Kettering Cancer Center argues that oncologists can no longer ignore the impact of rising treatments costs and must work with other stakeholders to achieve the best solutions.

“The mandate for demonstrating value in the care we provide is only increasing; we have the scientific tools to help us with these determinations. The best way forward may be controversial, but as oncologists advocating for our patients, we have a responsibility to better understand these issues, explain them and their implications to our patients, and work with our professional societies and other stakeholders to be part of the solution.”

The whitepaper highlights how the possibility of reduced reimbursement for providers will inevitably translate to higher risk for buyers, particularly in the case of expensive oncology therapeutics. Given the increased market power conferred by consolidation, manufacturers must now accept, and work toward, “a future environment in which they may be asked to take on some of the risks related to the performance and cost of their products”.