Technology that can mine the clinical patient data that already exists is finally available - now is the time to speculate to accumulate. 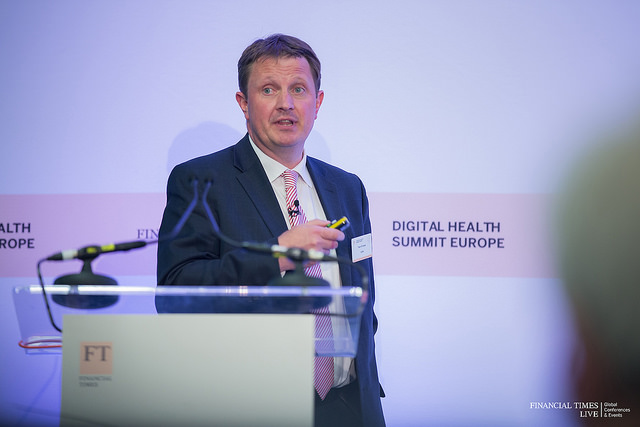 The intersection of technology and health has thrown up almost as many questions as it has solutions. “Innovation through collaboration: Bringing disruption to the patient” was the title of the recent Financial Times Digital Health Summit Europe, which took place in London in June.

Speaking at the event was ICON’s Chief Information Officer, Tom O’Leary. His presentation “Matching the right patient to the right clinical trial” explored the new reality for clinical trial sponsors in an era of big data and even bigger technology.

Since its inception in 1990, ICON has been offering a range of drug development services to the pharmaceutical industry, running clinical trials worldwide across all therapeutic areas, diseases, and indications, on behalf of pharmaceutical, biotechnology, and medical device companies.

O’Leary discussed how the organization is working to improve not only clinical trials but also the patient experience, by enhancing the feasibility, site selection, and clinical research planning processes via digital health.

O’Leary spoke to eyeforpharma following the Summit and began by explaining how ICON is at the forefront of efforts to leverage big data and cloud-based technologies in order to expand access to clinical trials. Has big data heretofore been largely ignored by an industry unable or unwilling to exploit it?

“Very specifically, what has happened is the computing power is now available that is able to digest large quantities of data in a matter of seconds and the cognitive abilities of much of that computer power has also enhanced our understanding and interpretation of it,” explains O’Leary.

“The other thing happening in the market is that all of the healthcare providers and payers have realized that they are all sitting on significant banks of patient data and they see the opportunity in some cases to monetize that, or in their cases, to be able to provide a better experience for their patients by making more of their data available to industry and other institutions.”

During his presentation at the FT Summit, O’Leary made a bold claim: The use of technology has the potential to remove 50% of the cost and time spent on clinical trials. He stands by this analysis and tells eyeforpharma that while these technologies require significant investment, this pales in comparison to the millions of dollars spent on clinical trials to no avail each year. Big data may aid in healing the industry’s Achilles heel when it comes to drug development – the recruitment and retention of patients to clinical trials.

The area of patient recruitment is one that still is not an exact science and we feel that the point of constriction is the access to patients, expanding the routes by which we can do that by putting more information into the hands of patients and communicating to patients that clinical trials are a care option for them and is one that they should seriously consider.

O'Leary is blunt when he asserts that the historic approach of clinical trial recruitment, whereby participants were identified by simply asking physicians if they had suitable patients within their practice for a particular study, “has not served us well”. He maintains that recruitment efforts should be patient-facing going forward, and foresees a role reversal, with informed and empowered patients approaching their own physician with details of a suitable trial. Crunching big data will allow this, he adds.

“The biggest challenge for drug development today, right across the industry, is the identification of sites and patients. We have been working hard on that within our organization, and so is the industry at large, and we are trying to find the areas of efficiency around site identification and patient recruitment. By comparison with the other phases of clinical trials, once all the patients are recruited, to get the trial progressed and delivered, that is a reasonably efficient process right across the industry. The area of patient recruitment is one that is still not an exact science and we feel that the point of constriction is the access to patients, expanding the routes by which we can do that by putting more information into the hands of patients and communicating to patients that clinical trials are a care option for them and is one that they should seriously consider. The evidence shows that patients who participate in clinical trials perform better and have better outcomes than those who just pursue the routine standard of care.”

Previously the domain of sci-fi movies or academic experiments, artificial intelligence has now begun to make its foray into the healthcare market, with its use expected to grow ten-fold by 2021.

IBM’s revolutionary cognitive computing system, Watson, is in use across many sectors, but in recent times, the tech giant has begun to narrow in on healthcare and enabling the computer engine to ingest and then make sense of clinical information, for practical and commercial use.

According to O’Leary, IBM has been on a very significant acquisition trail over the past five years, buying up organizations that have got significant banks of patient data that Watson can then mine. ICON has been working closely with the company, and are essentially “training” Watson on clinical trial protocols to distil data in a bid to automate the tedious process of clinical trial site and patient selection. This algorithmic approach to patient identification is a game changer, he says.

“We are working with IBM to teach Watson the cognitive computing ability of how to conduct our feasibility and patient selection and site selection for clinical trials. We are feeding in the parameters of the inclusion/exclusion criteria for clinical trials, as well as the other criteria that we are seeking to evaluate, in order to progress the development of various drugs. We are teaching Watson how we do that with the expectation that Watson will eventually be able to do that in a more scientific and automated way in the future,” he explains, adding that the advantage of IBM Watson, and similar AI systems, is that it can read huge amounts of both structured and unstructured data.

The whole area of genomics is another hotbed of cutting edge technologies and earlier this year, ICON was selected by Genomics England to support the largest genome sequencing project of its kind for cancer and rare diseases. The company is the data management partner for the English government’s efforts to sequence the genes of 70,000 patients or 100,000 genomes. Split between oncology, and rare diseases, the goal is to develop a new genomics medicines service for the National Health Service in the UK.

As the data management partner, ICON’s involvement in this project centers around helping the hospital sites across England gather the genomic data into a single database, where it will then be validated and interpreted. “Data from the 13 Genomic Medicine Centers  will be brought together and the data standardized. Various analyses and reports will be facilitated on that data so that they can better understand some of the key questions they have around certain populations within oncology and the profile of some of the rare diseases, in order to provide better diagnoses and help develop better medicines that are targeted at the genetic profile of patients,” O’Leary says.

PRO in your pocket?

ICON has also pioneered the Bring Your Own Device approach for patient-reported outcomes data collection in clinical trials, which they believe has the potential to enhance patient engagement and compliance. With near universal ownership of smartphones and/or tablets, as well as cheap and easily available wearables and sensors, this move seems like something of a no-brainer.

“One of the things that the industry is aware of is the inconvenience that it places on patients to visit their physicians or study nurse every four to six weeks in order for them to gather information on how they are progressing in the clinical trial and, by extension, how effective the drug is. The vast majority of people who take part in clinical trials are able to continue with their normal daily activities, working and so forth, and yet have this inconvenience about all the data and information that has to be tracked. The opportunity around using phones, wearables and sensors is allowing the data to be captured from patients while they continue with their daily activities as normal.”

Contrary to what some might think, the regulators are right behind this move, O’Leary explains; “there’s more of the data, it is being captured in real time and not in an artificial situation – it’s a win-win for everybody.” ICON is now running a series of pilot proof-of-concept studies, in conjunction with technology providers and members of the pharmaceutical industry, and are ultimately seeking to make this a standard approach for data collection within the clinical trial sphere.

It is critical that if we take data from any device, that it is definitely from the patient, and not from their kids, for example. Or that they have definitely taken that number of steps, and not just put their wearable in the tumble dryer! Making sure you can verify the data is critical.

Nonetheless, concerns remain with the quality and authenticity of the data collected. Currently, available wearable technology is still very much “consumer grade” – for the industry to ensure that data is robust and reproducible, the technology must be of medical grade, and ICON is working with the manufacturers to develop such products.

“It is critical that if we take data from any device, that it is definitely from the patient, and not from their kids, for example. Or that they have definitely taken that number of steps, and not just put their wearable in the tumble dryer! Making sure you can verify the data is critical.”

The concept of adaptive trial design is another way the pharmaceutical industry has been shaking up the rigid clinical trials process. While there are recognizable concerns, the idea is finally gaining traction, and the potential of adaptive design to accelerate trials while reducing costs is being realized. O’Leary admits the area of adaptive trials is very much an opportunity for ICON and says the company sees itself “at the forefront”, having taken a proactive approach by investing heavily in the necessary technology. For example, ICON acquired Aptiv Solutions, an adaptive trials specialist company, in 2014. Aptiv’s AddPlan and AptivAdvantage software is in fact used by the FDA, which has recognized the benefit of using these software applications in the evaluation of drugs and medical devices.

Industry take-up on these adaptive trial applications is still not as high as O’Leary would ultimately like to see, but he believes this is simply a process of education for some within the industry who may be concerned it could impede their approval chances.“The FDA position is that they are not in any way skeptical or deterred by the whole adaptive design approach, in fact, it is the opposite and they are encouraging it.”

Mounting pressure from the market is forcing the industry to adopt new approaches and technologies at a faster rate than they would prefer, and O’Leary believes pharma is now “at a point of inflection”.

“The timeframe for all of this to be commonplace is as short as three to five years, given the amount of activity going on in the space and when you compare where we are to where we were in the past, patients are really engaged in this and they want to understand how it is that they can play a bigger role in the management of their care.”