The United States is ramping up its advanced fuel manufacturing capabilities in an effort to secure a domestic supply through increased congressional appropriations and the creation of a dedicated taskforce. 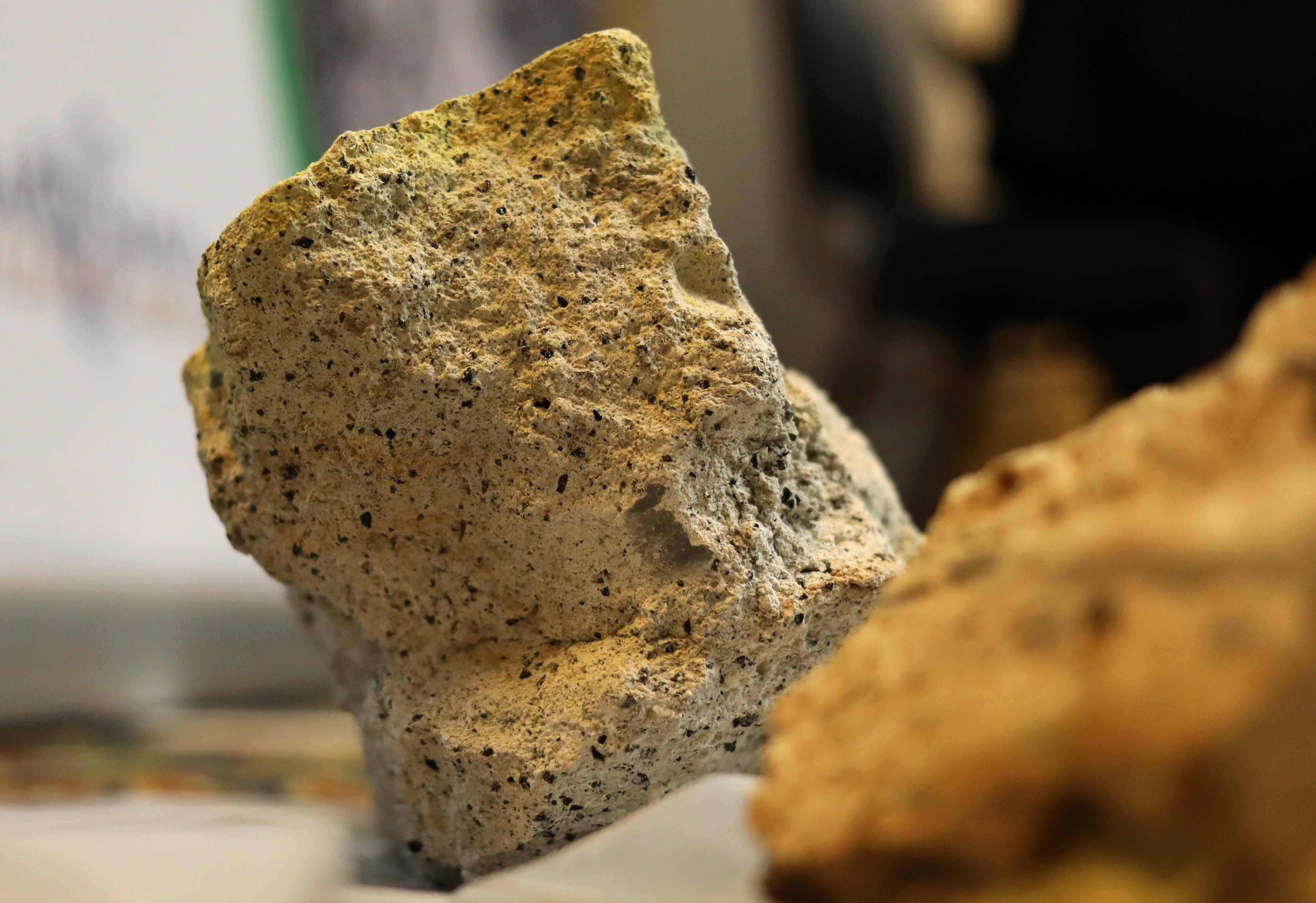 Uranium stone on display during a news conference in Lima. (Source: Reuters/Mariana Bazo)

Nine out of the ten advanced reactor designs selected for funding under the U.S. government’s Advanced Reactor Demonstration Program (ARDP) will require advanced fuel, such as high-assay low-enriched uranium (HALEU) and TRIstructural-ISOtropic (TRISO) particles, but there are no commercial suppliers of such fuels currently operating in the United States.

The U.S.'s uranium enrichment capabilities have dwindled to nothing in recent decades as it leaned on other states to supply the fuel.

Between 1985 to 2015, U.S. uranium enrichment capacity fell to zero from 27.3 million Separative Work Units (SWU, used to measure the amount of work done to enrich uranium) a year while Russia’s Tenex became a world leader, increasing production to 26.6 million SWU a year from just 3 million in the mid-eighties, according to figures by Centrus and U.S. Energy Information Administration.

Until the Russian invasion of Ukraine earlier this year, advanced reactor manufacturers were likely, at first, to look to Russia for supply.

Plans were in place to assure that supply in the United States would also be increased as demand climbed from demonstrations to commercial operations of the new generation of nuclear reactors, but since the invasion, those plans have changed.

“Last December, we saw demand beginning to form starting in 2024-25 and then really accelerating going into the next decade. These numbers were collected pre-Russian invasion, pre-spike in gas prices, and the climate conversation has gotten more serious,” says Senior Director of Fuel and Radiation Safety Programs at Nuclear Energy Institute (NEI) Nima Ashkeboussi.

The Department of Energy (DOE) projects the U.S. market alone will need more than 40 metric tons of HALEU for the new generation of reactors by the end of the decade, and with Russia under international lock down, much of that will need to come from domestic suppliers.

Building a domestic supply chain was under consideration before the invasion, but the industry’s sense of urgency jumped as Russian tanks rolled across the Ukraine border.

“I think we’re in a much better position than when we started the year. I think that industry would like to see things move a lot quicker, but they have started to move, and we have seen some meaningful actions taken,” says Ashkeboussi.

This year, the Inflation Reduction Act (IRA), which has allocated over $350 billion in climate provisions, put aside an investment of $700 million to support the development of a domestic supply of HALEU, the DOE finalized a key HALEU production contract with a Centrus subsidiary, and BWX Technologies began TRISO fuel production for the Department of Defense (DoD).

Of that $700 million, $500 million will go toward making HALEU for the first advanced reactors and establish the HALEU consortium, $100 million will be to design and licence HALEU transportation systems, and the remaining $100 million will support the availability of HALEU for research, development, demonstration, and commercial use.

Earlier this month, the DOE announced the establishment of a HALEU consortium which will bring together members of the nuclear community to provide demand estimates for commercial use, purchase HALEU made available to members, carry out demonstration projects using HALEU, and identify opportunities to improve the domestic reliability of the supply chain.

Meanwhile, in September the White House sent a supplemental appropriation request to Congress , described as an 'emergency requirement', to provide $1.5 billion for the DOE's Office of Nuclear Energy to build a reliable supply of low-enriched uranium for existing plants and HALEU.

Centrus’ American Centrifuge Operating (ACO) has started work on its uranium enrichment centrifuges in Piketon, Ohio, through a cost-sharing contract with the DOE, while front runners for the U.S. HALEU plan include Global Laser Enrichment, French uranium enricher Orano, and the British-German-Dutch enricher Urenco.

“It’s not a technology problem. This is strictly a commercial business decision challenge that needs funding,” says Ashkeboussi. The problem for commercial manufacturers of HALEU is an old one for new technologies; it’s hard to sell new advanced reactors without fuel supply, and difficult to finance fuel production without guaranteed customers for those reactors.

“That’s where the government role is critical on both sides of that equation in terms of getting the reactors over the hurdle so that they can be demonstrated and deployed, and then providing sufficient demand for HALEU that it supports the necessary investment to get HALEU production up and running,” says Centrus Vice President of Corporate Communications Dan Leistikow.

Centrus’ ACO base contract value is around $150 million in two phases through 2024 with Phase One including some $30 million cost share contribution from Centrus matched by $30 million for the DOE to finish construction, bring the cascade online, and demonstrate production of 20 kilos of 19.75% enriched HALEU by the end of 2023.

The Piketon demonstration cascade will produce 900 kilos of HALEU a year in Phase Two, to be given to the DOE on a cost-plus-incentive-fee basis through an expected value of around $90 million, subject to appropriations.

“As we build additional cascades, they will be larger, commercial scale, so they will each produce 6 metric tons (MT). We can deploy with sufficient funding, and we can scale up the plant to just about any level of production that is required,” says Leistikow.

The ACO facility has room for thousands of centrifuges and the company is ready to upscale as demand increases with the first, full-scale cascade operating with 6 MT capacity per year within 42 months of receiving the necessary funding, then an additional cascade every six months depending on demand.

“So once you get the plant up to a commercial scale with additional cascades, then marginal increases above that as demand grows, we’re confident we can build new cascades faster than people can build reactors,” he says.

“The challenge is having the necessary funding and offtake commitments in place to make the initial expansion to commercial scale.”

Meanwhile, as ACO builds its own commercial scale HALEU venture, BWX Technologies, under a $37 million award from the Idaho National Laboratory (INL), will produce TRISO fuel to power the first microreactor built and operated in the United States, Project Pele, at its facilities in Lynchburg, Virginia.

Fuel for the reactor, which will also be supplied to NASA, will be downblended from U.S. government stockpiles of high-enriched uranium (HEU) to HALEU and fabricated into TRISO fuel, a poppy-seed sized, energy-dense coated uranium particle which can withstand high temperatures and is the fuel of choice for many advanced reactors in development.

“Therefore, these facilities have the unique capabilities to fabricate HALEU and TRISO. The specialty fuels production line at our facility in Lynchburg is capable of manufacturing different forms of HALEU fuel for a variety of terrestrial and space applications.”