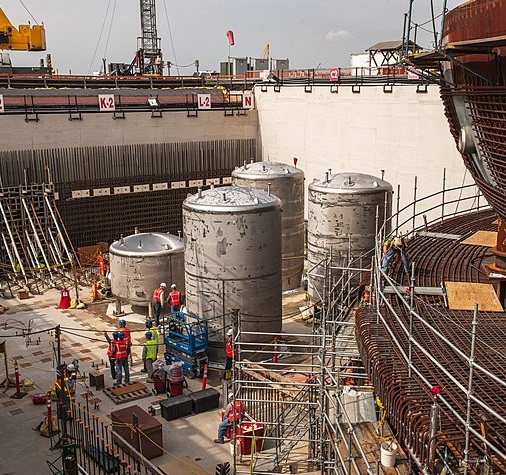 US AP1000 plant owners back construction after cost risks amended

The four co-owners of the Vogtle 3&4 AP1000 nuclear plant project in Georgia have agreed to continue construction of the plant and will put in place risk mitigation measures against rising costs, the groups announced September 26.

Georgia Power, a subsidiary of Southern Nuclear, owns 45.7% of the project, while Oglethorpe Power Corporation holds a 30% share, Municipal Electric Authority of Georgia 22.7% and Dalton Utilities 1.6%.

Supplied by Westinghouse, Vogtle 3&4 is the only new nuclear plant under construction in the US. The project has suffered severe delays and cost overruns, prompting Westinghouse to file for bankruptcy protection in March 2017. In January 2018, Westinghouse owner Toshiba agreed to sell Westinghouse to investment group Brookfield Business Partners for a price of $4.6 billion.

Under the ownership agreement, the partners had to vote on the project after cost estimates rose by $2.2 billion earlier this year to $27 billion, more than double the original estimate. Oglethorpe Power recently said it did not want to pass on rising costs to its members, made up mainly of electric supply businesses.

Under a new agreement, Georgia Power will be responsible for an escalating portion of construction costs above an agreed amount. The ownership agreement will also be changed so that any future increase to cost estimates will not trigger a vote to enable construction to continue.

The U.S. Department of Energy has so far issued $5.6 billion of $8.3 billion in loan guarantees for the Vogtle 3&4 project.

“The Department of Energy (DOE) is pleased with today’s vote to proceed with the construction of Vogtle 3&4..DOE hopes the successful completion of this project will mark the beginning of a nuclear renaissance in America," the DOE said in a statement.

European nuclear developers could significantly reduce costs if they implement labor deployment, project governance and other drivers which have slashed costs in Asia, a recent report said.

By improving their performance rating against eight key cost drivers, European and North American new build projects could reduce costs by over 35%, according to the report commissioned by Energy Technologies Institute (ETI) and led by CleanTech Catalyst (CTC) and Lucid Strategy.

The plant has completed 168 hours of full power continuous operation and can now be considered to be in commercial operation, China National Nuclear Corporation (CNNC), World Nuclear News reported September 21.

EDF's 3.2 GW Hinkley Point C EPR project is under construction in Somerset, England and is expected to be completed by 2025. China General Nuclear Power (CGN) holds a third stake in the plant.

The suppliers' new Joint Venture will integrate and coordinate the delivery of all main Mechanical, Electrical and HVAC (MEH) systems, bringing together all Tier 1 MEH and support contractors.

A central Project Management Office will manage critical project interfaces, scheduling and sequencing of the MEH activities on site and refine and harmonize plant systems.

"[This] approach is an example of innovation based on the experience gained at other nuclear construction projects," the companies said in a statement.

China brought online the world’s first EPR and AP1000 units in June. The MEH Joint Venture “will deliver huge benefits to the delivery of the Hinkley Point C project, and to the UK nuclear industry as a whole," Dongshan said.

The JV will also examine ways to create new UK manufacturing capacity for cutting-edge pipework, which could benefit other nuclear projects, the partners said.

NuScale plans to deliver the U.S.' first SMR reactor by the mid-2020s and aims to complete the design certification application (DCA) approval process for its light water-based design by early 2021.

BWXT will immediately start engineering work to optimize manufacturing, assembly and transportation of the NuScale IPWR, the developer said. This phase is expected to continue until June 2020 and NuScale will contract for the "preparation for fabrication" and "fabrication" stages at a later date, it said.

BWXT was chosen following an 18-month selection process which drew interest from 83 companies based in 10 countries.

“BWXT’s established industry experience was important for us, and so was choosing an American company,” John Hopkins, President and Chief Executive Officer of NuScale Power, said.

Over the last year, NuScale has conducted value engineering research to identify potential savings in capital and operational costs for its IPWR.

In June, NuScale raised the capacity of the design by 20%, increasing the module capacity from 50 MW to 60 MW.

The power uprate is a significant boost for NuScale as it lowers the estimated levelized cost of energy (LCOE) by 18% and reduces capital costs from $5,000/kW to around $4,200/kW.

These further cost-saving measures were "being considered for implementation," he said.

EDF has selected Framatome to upgrade instrumentation and control (I&C) systems on its 900 MW reactors in France as part of a fleet modernization plan to extend the lifespan of the reactors beyond 40 years.

Work will commence in 2019 and will be performed during the fourth ten-yearly inspections of the plants.

"Framatome, as prime contractor will leverage its own expertise and partner with other French companies to procure a part of the technology associated with this contract," the company said in a statement.

In 2011, EDF awarded Framatome the contract to upgrade the I&C system on its 1,300 MW reactors.