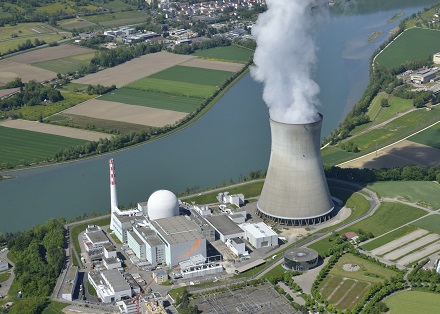 Switzerland is to stop its five nuclear reactors, in staggered fashion, by 2035. (Image credit: freaktalius)

BKW is to definitively stop its 373 MW Muehleberg nuclear power plant in western Switzerland on December 20, 2019, the company said March 2.

Final decommissioning of the plant will start in late September 2020, once all the fuel has been transferred from the reactor to the spent fuel pool and it is cooled separately from other systems.

Muehleberg is to be the first Swiss nuclear plant to close under a federal government plan to phase out the country's entire 3.3 GW nuclear fleet by 2035.

BKW had intended to operate the plant until 2022, but in October 2013, the company announced it would close the plant in 2019, three years ahead of schedule, to avoid making long-term investments in the plant.

BKW concluded that a weak power price outlook- in particular impacted by continuing expansion in renewable power in neighbouring Germany- could not justify the significant investments required for longer-term operations.

These companies will be involved in a 500 million pound ($711.1 million) framework contract for decommissioning work over the next decade.

"DDP is Sellafield Ltd’s first flagship example of its bold new approach in procurement where guaranteed benefits for the community are embedded in the tendering process. All companies bidding to be involved in the partnership had to outline how they would deliver new skills, community benefits and encourage economic growth by committing to sub-contracts with small-to-medium sized enterprises," Sellafield Ltd said.

The SMR design for UAMPS’ Carbon Free Power Project (CFPP) is being provided by Oregon’s NuScale. The plant developer aims to deliver a SMR plant to UAMPS by late 2023.

UAMPS must identify a suitable area within the INL site boundary which would not conflict with INL mission work, DOE said.

The Nuclear Energy Innovation Capabilities Act (H.R. 4084) directs the Department of Energy (DOE) to prioritize federal R&D infrastructure that will enable the private sector to invest in advanced reactor technologies. The bill aims to encourage prototype development at DOE labs.

The bill was approved by the House of Representatives' Committee on Science, Space, and Technology in January. According to Nuclear Energy Institute (NEI), the companion bill (S 2461) was passed by the Senate in February.

The Senate bill was attached as an amendment to the larger Energy Policy Modernization Act of 2016 (S 2012) and the Senate will need to approve some version of S 2461-- either as a stand-alone bill or part of a larger legislative package-- for the bill to move forward, NEI said.

Westinghouse’s SMR design is a 225 MWe integral pressurized water reactor which holds all primary components inside the reactor vessel.

"A key component of the manufacturing study will be identifying efficiencies within the advanced manufacturing process to significantly reduce capital costs and drive project savings," Westinghouse said in a statement March 3.

Last October, Westinghouse proposed to partner the UK government in the licensing and deployment of its Small Modular Reactor (SMR) technology.

Thomas Piquemal has resigned as Chief Financial Officer (CFO) of EDF, reportedly due to an internal disagreement over whether to move forward next month with the U.K. Hinkley Point C nuclear reactor project.

Piquemal met Jean-Bernard Lévy, EDF chief executive, several times in the week ending March 6, saying that the company should wait another three years before making the Final Investment Decision on the project, the Financial Times reported.

Xavier Girre, 47, joined EDF in 2015 as France CFO. From 2011 to 2015, he was Senior Vice President (SVP), CFO of La Poste Group and XAnge Private equity Chief Executive Officer. From 1999 to 2011, he was Group chief risk and audit officer at Veolia and SVP, CFO of Veolia Transportation and Environmental Services.