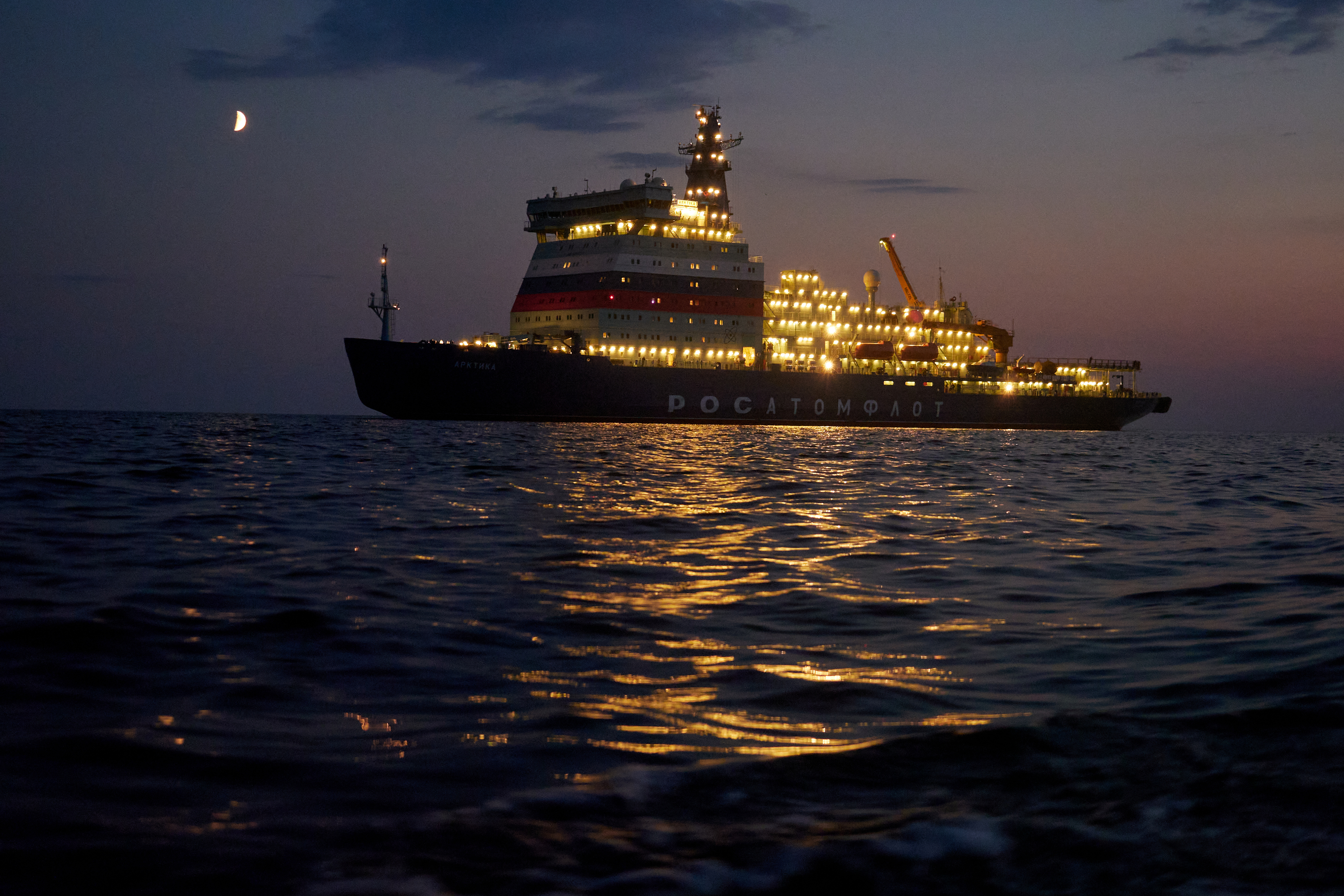 The nuclear-powered icebreaker Arktika is seen during the sea trials in the Gulf of Finland. (Source: Reuters)

Russia’s nuclear-powered ice breaker Arktika, said to be the world’s largest and most powerful, has departed from for the Arctic port of Murmansk from the Baltic Shipyard in St. Petersburg, to test ice conditions on a journey expected to take two weeks, ROSATOM said in a statement.

The ship is crucial for Russia’s efforts to develop the Northern Sea Route which runs from Murmansk to the Bering Strait near Alaska. As the ice thins due to a warming climate, Moscow aims for route to become a direct link between Asia and Europe.

During the trip, the 173.3-meter long, 34-meter wide Arktika will enter the ice as it moves north of Franz Josef Land which will enable operators to adjust the system of electric motion of the ship in icey conditions, Rosatom explained.

The icebreaker is equipped with two specially designed, new generation RITM-200 reactors and a steam turbine unit with an overall power capacity of 175 MW.

President Vladamir Putin has said that the country’s Arctic fleet would operate at least 13 icebreakers, most of which would be powered by nuclear reactors.

The International Atomic Energy Agency (IAEA) has selected five best entries of the crowdsourcing challenge which is seeking entries to provide original concepts or project outlines for advancing the decommissioning of nuclear facilities or environmental remediation of radiologically contaminated sites, the IAEA said.

Three of the entries have focused on decommissioning and two on environmental remediation.

One entry aimed to investigate residual contamination on site.

“I have developed a device capable of imaging the radioactivity contaminating the various surfaces such as floors, walls or apparatus encountered in facilities that are being dismantled,” said Sylvain Leblond, a research engineer at the French Alternative Energies and Atomic Energy Commission (CEA).

Another entry designed a robot that could map and monitor contaminated areas to avoid potential radiation risks to staff, while another developed an approach for estimated fuel debris distribution at the Fukishima Daiichi Nuclear Power Plant in Japan.

A total of 26 submissions from 12 countries were received and evaluated against criteria such as level of innovations and creativity.

A planning decision on whether to consent to the construction of the Wylfa Newydd nuclear power project in the United Kingdom, originally due to be made at the end of September, has been delayed until Dec. 31 after a request by Horizon Nuclear Power, the British project developer owned by Hitachi.

Hitachi announced mid-September that it was ending its business operations on the Wylfa project, suspended since January last year, and Horizon said it would take steps to close down its development activities.

On Sept. 28, Horizon’s Chief Executive Officer Duncan Hawthorne wrote to Gareth Leigh, Head of Energy Infrastructure Planning at the Department of Business, Energy and Industrial Strategy (BEIS) to say it was in talks with third parties and to request any decision on the project application be deferred until Dec. 31.

“Due to the recent change in circumstance, a short extension to the decision deadline would be beneficial to enable Horizon to work constructively with its key stakeholders to ascertain the options for the Wylfa Newydd DCO Project and secure its future,” the letter said.

“Since Hitachi, Ltd’s announcement to cease development activities associated with the Wylfa Newydd DCO Project, Horizon has been engaged in discussions with third parties that have expressed an interest in progressing with the development of new nuclear generation at the Wylfa Newydd site in Anglesey, Wales,” he said.

General Atomics Electromagnetic Systems (GA-EMS) has delivered a design concept of a Nuclear Thermal Propulsion (NTP) reactor to power future astronaut missions to Mars for a NASA-funded study, the company announced in September.

The reactor has a compact core, thanks to the use of high-assay low-enriched uranium (HALEU) fuel.