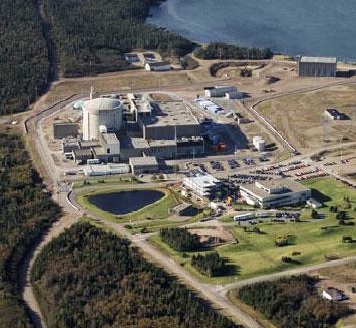 In July, the government of New Brunswick partnered with SMR developers Moltex Energy and Advanced Reactor Concepts (ARC) in a new research cluster, aiming to build commercial demonstration plants by 2030.

New Brunswick will provide $10 million to the program, while Moltex and ARC will each provide $5 million and set up offices in Saint John in the Bay of Fundy.

The demonstration plants would be built at NB Power's Point Lepreau nuclear site, where it operates a 705 MW Candu reactor.

The storage system would allow the plant to load follow and mitigate swings in renewable energy supply, O'Sullivan said.

“The reactor runs all the time, and the heat either goes into the grid or into the storage tanks – exactly like the concentrated solar power [CSP] energy,” he said.

While the first plant would be built at the Point Lepreau nuclear plant site, subsequent plants could potentially replace coal-fired plants in New Brunswick and nearby provinces such as Nova Scotia, O'Sullivan said.

ARC also plans to demonstrate its design is “competitive with all other forms of electricity generation,” Don Wolf, ARC CEO and Chairman said in a statement in July.

Low-cost SMR capacity could also boost New Brunswick's power export potential. The province currently has 2.4 GW of export capacity through power interconnectors with all its neighbouring provinces. Net power exports were 0.7 TWh in 2016, around 5% of total power generation.

New Brunswick’s government is clearly attracted by the promise of greater power exports.

"New Brunswick can look to advancements in SMR technology to fulfill future needs. Moreover, the province will be more prepared to export carbon-free energy to other jurisdictions if the opportunity presents itself," the government said in a statement.

The SMR market in Canada is estimated to be worth C$5.3 billion between 2025 and 2040, according to a national SMR roadmap published last month by a joint committee of government and industry.

Canada’s electricity demand is forecast to rise by 0.9% per year between 2015 and 2040, according to the National Energy Board (NEB). Under the international Paris Agreement on climate change, Canada has pledged to reduce greenhouse gas emissions by 30% below 2005 levels by 2030.

"Going forward, as we look at a pan-Canadian approach to nuclear, areas which have large population centres certainly could develop and support a Candu style reactor, but in areas that don't have transmission access as robust, or the population centres are smaller, the small modular reactor suddenly becomes a good fit," he said.

The SMR roadmap warned regulatory and financial support measures are required to turn Canada into a world leader for SMR development and export.

Federal and provincial governments should provide R&D funding on a cost-share basis for the construction of one or more advanced SMR demonstration projects, the roadmap said. The Canadian Nuclear Laboratories (CNL) has already designated SMR technology a research priority and aims to host a demonstration SMR plant by 2026. In June, four SMR designs advanced to the pre-qualification stage.

Federal and provincial governments should also implement measures to share risks for the first commercial deployment of SMRs in Canada by 2030, the roadmap said. The federal government should provide long-term cost stability in the form of production tax credits [PTCs], while reducing the capital cost burden, by either implementing an investment tax credit [ITC] or extending accelerated cost of capital allowance for nuclear energy projects, it said.

As the government fleshes out a future framework for SMR deployment, a number of developers have entered into licensing processes with the Canadian Nuclear Safety Commission (CNSC).

To date, 10 SMR developers have applied to the CNSC for pre-licensing vendor design review. In October, Terrestrial Energy became the first SMR developer to enter phase 2 of the design review process, in which the design will be examined for any fundamental barriers to licensing and is expected to take around two years.

The SMR roadmap recommends the CNSC engages with industry, the public, and indigenous representatives to implement an appropriate risk-informed approach to safety regulations.

SMRs of capacity below 300 MW should also be excluded from the federal impact assessment process, which has been extended to include all natural resources projects, it said.

In addition, federal authorities should review nuclear liability regulations to ensure limits for SMRs are aligned with the risks they pose, the roadmap said.

A key driver of Canadian SMR support is the potential for exports, as countries strive to meet carbon reduction objectives.

The international SMR market is worth an estimated C$150 million ($113 billion) in 2030-2040, according to initial figures set out in the SMR roadmap.

This forecast is based on assumptions of C$100 billion per year for the replacement of coal-fired power generation, C$30 billion/year for remote island nations and off-grid communities, C$3.5 billion/year for mining applications, and C$12 billion/year for steam production for industry.

"While there remains work to be done to validate these initial estimates, capturing even a small share of these end use markets could amount to billions per year to Canada’s economy," the roadmap said.

ARC and Moltex will now work with New Brunswick authorities to advance their research studies and demonstrate the competitiveness of advanced reactor technologies.

“Moltex and ARC moved in to set up the nuclear research centre, and we plan to do R&D work with University of New Brunswick and then establish ourselves,” O'Sullivan said.

While New Brunswick is not the largest nuclear market in Canada, the province hosts a range of skills which can boost export potential, O'Sullivan noted.

"They have led nuclear innovation projects before," he said.

"They were the first in the world to do a refurbishment of a CANDU plant…There is a precedence of New Brunswick leading the way.”