Canada’s small modular reactors (SMRs) program is expanding after the province of Alberta joined Ontario, New Brunswick and Saskatchewan in April to support the development of the technology as the government tightens emissions targets.

During the U.S.-led ‘Leaders Summit on Climate’, Prime Minister Justin Trudeau doubled-down on Canada’s pledge to battle climate change by promising to cut emissions 40%-50% in 2030 from 2005 after saying it was already on track for a 36% reduction for the same period.

Nuclear technology, which generates around 15% percent of Canada’s electricity with 19 reactors providing some 13.5 GWe of power capacity, plays a large part in the plan and while there have been proposals to build several large reactors, these have been placed on the backburner in favor of refurbishment of existing plants and as attention turns to emerging nuclear technology.

In March, four of the country’s major utilities released a report that lays out the framework of an ordered, cross-provincial rollout of advanced nuclear reactors, starting with a grid-scale SMR in 2028 and building on the government’s own roadmap and agreements signed by the provinces of Ontario, New Brunswick, and Saskatchewan and, in April, Alberta.

“The nuclear sector plays a key role in Canada’s economy, contributing C$17 billion ($13.7) annually, while supporting 76,000 Canadian jobs (i.e. direct, indirect and induced). In addition, Canada is home to the planet’s richest uranium resource – the Athabasca basin in Saskatchewan – and is the second-largest producer of uranium in the world,” the report says.

By 2050, a fleet of SMRs in Canada could lower the cost of reaching net zero carbon emissions by more than 5% and bring an extra C$5 billion ($4 billion) annually to gross domestic product, according to a separate study by EnviroEconomics and Navius Research for the Canada Nuclear Association (CNA).

In the heavy industrial sector alone, SMRs could cut greenhouse gas emissions by 18% by 2050, the report “Emission and Economic Implications for Canada Using Small Modular Reactors in Heavy Industry” said, the equivalent of removing all current emissions from the oil and gas sector for a one-year period or taking more than three million cars off Canadian roads each year.

Estimated SMR capacity by region in 2035 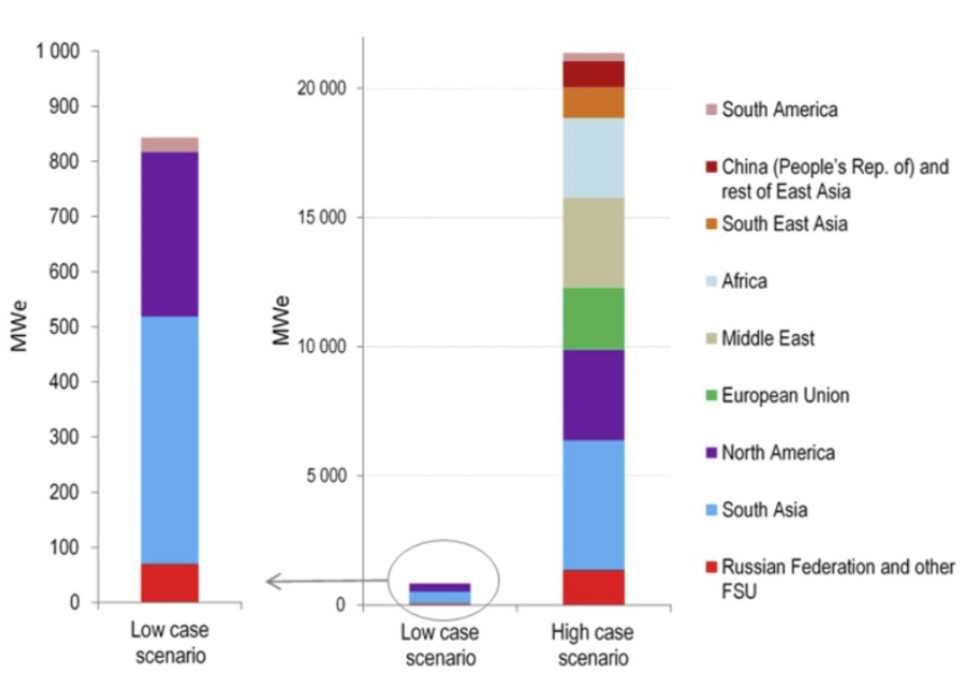 Note: The National Nuclear Laboratory (NNL) in the UK forecasts a larger market potential of up to 65 GWe of installed capacity by 2035.

Canada is perfectly placed to show how a country can prepare for and implement the new generation of nuclear power, says Vice President of New Nuclear Development at Ontario Power Generation (OPG) Robin Manley.

“We have uranium in the ground, we have mining, milling, and manufacturing capability…. We have a R&D capability at our labs and in our universities, that can do fundamental nuclear research and solve tricky problems. We have experienced nuclear operators with decades of experience,” says Manley.

“We have host communities and members of the public that understand the operations at the plants. We have an experienced and world class nuclear regulator that is looked up to by others as an example of how to do nuclear regulation. All of the elements are there for the next generation of nuclear plants to be built in Canada.”

Ontario’s C$26 billion nuclear reactor refurbishments at the Darlington and Bruce Nuclear Generating Stations, meanwhile, will double the lifetime of its current nuclear fleet while building on and maintaining the country’s nuclear supply chains.

Early last year, Bruce Power began a 13-year Major Component Replacement (MCR) project for its 6.5 GW power plant to refurbish and replace six of the plant’s eight reactors to extend the plant’s life by 30-35 years to 2064.

OPG’s Darlington Refurbishment Project is five years into renovating the four reactors at the 3.5 GW Darlington Nuclear Generation Station with the completion of Unit 4 expected by the end of 2026.

Alberta, Canada’s fourth most populous province with around 4 million residents and at 660,000 square kilometers, or around the size of the Ukraine, has a thriving oil and gas industry which serves as a pillar of the local economy.

The province is often compared to Texas with its largely rural identity wrapped up in cowboys and rodeos and with the fossil fuel industry providing more than two thirds of the total oil and gas exploited in Canada.

When signing the Memorandum of Understanding alongside leaders of New Brunswick, Ontario and Saskatchewan on April 14, the region’s premier Jason Kenney said Alberta had always been committed to clean and affordable energy and SMRs could help reduce greenhouse gas emissions by, for example, providing power for Canadian oilsands producers.

“Nuclear is the cleanest form of electricity production and, with SMRs, is now more affordable and scalable for industrial use. We are excited to be part of this group that will help develop Canadian SMR technology,” Kenney said.