The Wednesday Update including: the rise of mobile video, social media as focus group and how to choose the right social media tools

New research from Crimson Hexagon has revealed that two-thirds of digital marketers now consider social media as a more reliable source of consumer sentiment than traditional focus groups. However, the research also shows that only 16% of brand agencies are using social media monitoring showing a huge mismatch between the prevailing view and actual action being taken.

Curt Bloom, president for Crimson Hexagon said: "Social media is the world's largest focus group, with millions of consumers regularly sharing their honest and candid opinions online. No brand or organisation can afford to overlook such a rich source of feedback, ideas and opportunities to engage with customers and prospects.

“These survey findings reveal that while many industry professionals are aware of the value of social analytics, it’s not in widespread practice. The awareness and influence of social sentiment is undeniable, and what is needed now is investment in the tools capable of extracting raw data, giving it meaning and context, and harnessing it to develop better business decisions.”

As social media has matured it has become clear that as a source of consumer sentiment that can be applied to brand marketing, these networks are proving highly effective. Corporations now need to take the next step and place analytical processes within their brand management systems to leverage the insight into consumer sentiment that is waiting to be accessed.

New statistics from Unruly make for interesting reading if your corporation is assessing its use of video. It has been known for some time that video content above all else is shared widely across social media networks. This new research suggests that video on mobile devices is even more popular. Unruly looked at 3,000 brand campaigns and found the average CTR was 13.64% compared to 5.45% on desktop.

Also, according to the IAB’s Internet Advertising Revenue Report, advertising revenue in the US from digital video reached $1.3B in the first half of this year - a 24% increase from last year. The report, compiled by Price Waterhouse Cooper (PwC), also found mobile ad revenues jumped 145% to more than $3 billion in the first half of the year from the same period a year ago.

“Everyone knows that mobile video consumption is exploding. What we’re seeing in 2013 is an increase in brands requesting mobile-only social video campaigns, with short-form video formats which are native to mobile, such as Vine and Instagram, helping to drive this growth,” said Matt Cooke, co-founder and CTO at Unruly.

Unruly’s previous research highlighted which brand campaigns video content was the most popular. Nokia’s spectacular launch for the 800 smartphone was a runaway success. Clearly for brand owners, developing a strong and engaging video component to their campaigns is now more important than ever, and can show real upticks in CTRs.

The naysayers regarding Facebook’s ability to pull in advertising revenue should take a close look at the new research from Kenshoo Social. According to the ad service that looked at 85 billion ad impressions during Q2 and Q3 of 2013, click volumes rose by an impressive 14.4%. Conversion was 2.36 with ROI up by over 3 times.

Commenting Todd Herrold, Kenshoo Social’s senior director of product marketing said: “Consumers are increasingly taking action and making purchases as a result of the more engaging and relevant ads they experience on the social network.  And advertisers are becoming increasingly experienced with Facebook advertising and are implementing sophisticated and highly effective strategies to drive direct response goals.

“Brands are promoting their most relevant products, customising ads and tracking each touch point in the customer journey across paid, owned and earned social media as well as across media channels, including search and social. I’ve said it before, and I’m sure I’ll say it again – Facebook is a powerful direct response channel that drives significant sales, revenue and ROI.”

Facebook has had somewhat of a rocky ride since its IPO, but what is clear is that their willingness to engage with brands, and modify their platform to more easily accommodate ads is now paying dividends. 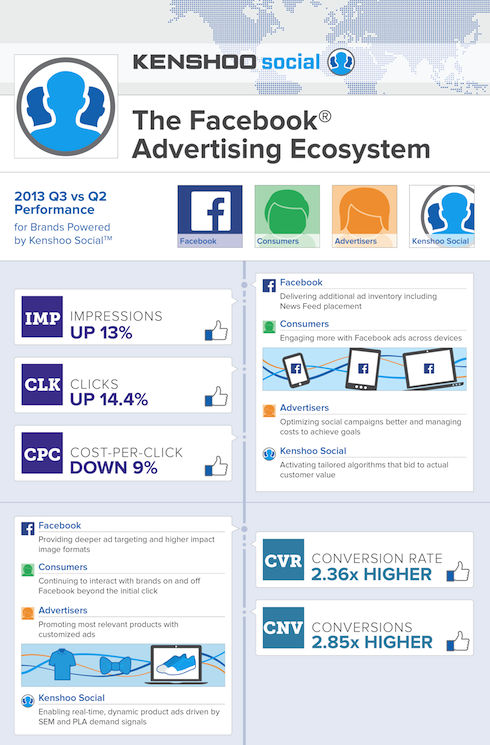 Two new infographics together offer corporations insight into how social media can be leveraged. The first from InstaZebra lifts the lid on Instagram. The headline figure that companies could be losing out on 150 million potential customers by ignoring the platform certainly grabs the attention. This platforms growth has been somewhat under the radar, but could be a good match especially as the network announced the addition of ad space onto its system earlier this month.

The second infographic from GSMI is very useful if your business has been having issues seeing the wood for the trees when choosing which social media tools to use. Dividing up the current tools into categories makes it child’s play to compare vendor platforms to identify the right ones for your corporation. 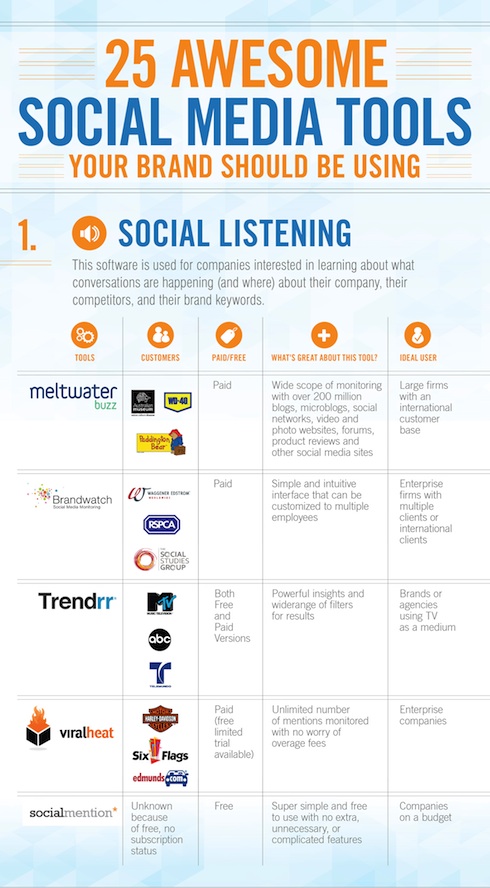 Embed social media across your company for a more responsive business, more robust reputation and an increase in marketing conversion