Wednesday Update: Gearing up for the holiday season, the gender of Pinterest, and how Facebook ad sales are evolving

Gearing up for the holiday season, the gender of Pinterest, and how Facebook ad sales are evolving

According to a recent poll of marketers by Ad Age revealed that Facebook continues to gain traction in the digital ad space. Over 80% of the 1,200 respondents said they now use Facebook as a marketing channel. What is more telling however is that nearly three-quarters are paying for Facebook advertising services.

These apparent increase in the use of Facebook ad sales needs to be placed into context. Only around 10% of respondent’s marketing budgets are currently being allocated to social media networks – a figure that is surprisingly small considering the potential that these networks offer.

What is clear is that social media marketing spending has to increase. Marketers are still hesitant to a degree with the allocation of budget, but this will change. The fact that they are purchasing more Facebook ad space than ever before, and with Twitter’s IPO just around the corner, social media ad spending is set to rapidly expand.

With every retailer gearing up for the holiday season, a new infographic from Crowdtap shows that nearly two-thirds of consumers will use social media networks to locate the perfect gift for family and friends. Taking advantage of recommendations from people on their trusted networks is also high on the list of services consumers will use to make purchasing decisions.

The recommendation economy coupled with promotional activity will be a powerful retail channel this Christmas. And if you are a bricks and mortar retailer, social media will impact massively on in-store purchases with over half of consumers using social media to communicate your deals to their social network. 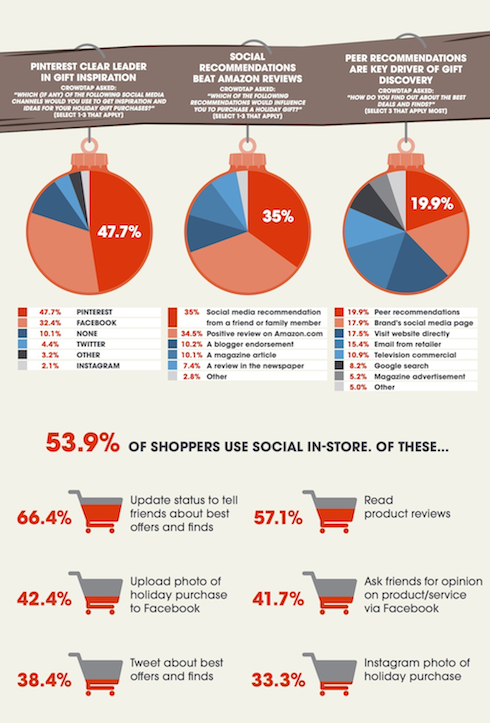 Pinterest has been one of the massive successes of all the recent entrants into the social media space. Now boasting over 70 million users, the network does though, have a clear profile of users that all marketers should be paying close attention to. An infographic from Pinbooster clearly shows that if your business is aimed at women, you need a presence on Pinterest fast.

According to Pinbooster 80% of Pinterest users are women. “Because Pinterest is such a visual, search-focused, aspirational network, it’s so much better for e-commerce than any other platform,” said Dave Weinberg, CEO at Pinbooster. “And because it is aspirational, users are coming on and finding all these things they love in these different categories because they’re hoping eventually they’ll have the opportunity to try, build, or buy them themselves.”

Brands that have a clear female demographic should actively pursue these potential customers across Pinterest. There is clearly a desire to communicate about goods and services. Businesses that can leverage that innate desire in their female customers will see high levels of engagement right across their brands.

“Our results show that anger is more influential than other emotions like joy, which indicates that the angry tweets can spread quickly and broadly in the network,” the research concluded.

In China much of the anger is directed at Government, with businesses taking much of the wrath from disgruntled consumers in the West. Corporations understand the negative impact that a post can have – just ask FedEx – but brands are not powerless. It’s important to listen to these comments and act upon them. Ignoring an angry post can easily escalate into something more serious. Crisis management is now becoming more important across social media networks with businesses placing this within their wider contingency planning.