YouTube is the most followed brand. Using social media for event promotion, and video continues to expand its popularity.

How to optimise events with social media

Every corporate marketer knows that events can be a powerful marketing tool if handled correctly. A new infographic from Gryffin illustrates the power that social media now has in this context. Events that were in the past impersonal can suddenly become intimate affairs with organisers and exhibitors working together to deliver the ultimate event for each individual attendee.

The latest statistics reveal the most followed brands across Twitter. YouTube maintains its dominance with over 48 million followers - even the official Twitter feed couldn’t match this number. It seems visual media continues to be highly popular with Instagram taking second place.
And in other Twitter news if you missed it, the company’s Q4 earnings and much anticipated traffic figures were released last week. Twitter reported 288 million MAUs for Q4 2014, up just 4 million on Q3’s 284 million, which was on the low end of analyst expectations (which ranged between 287 to 292 million MAUs for the period). Earnings for the period topped $479 million.
“We closed out the year with our business advancing at a great pace. Revenue growth accelerated again for the full year, and we had record quarterly profits on an adjusted EBITDA basis,” said Dick Costolo, CEO of Twitter. “In addition, the trend thus far in Q1 leads us to believe that the absolute number of net users added in Q1 will be similar to what we saw during the first three quarters of 2014.”
In addition, Twitter and Google have now signed a deal that will see tweets appearing in Google search results. The return of tweets to Google – which disappeared in 2011 after the last agreement expired – offers marketers another channel where close connections can be made between their company’s service and products and the instant nature of Twitter-based marketing messages. 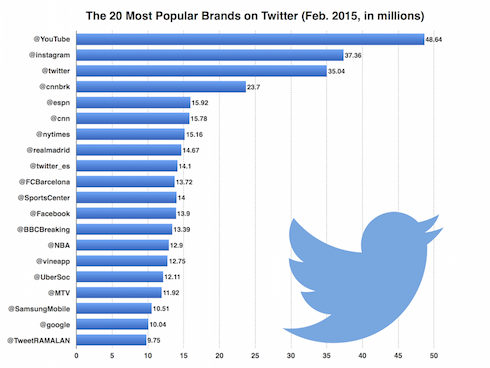 According to the latest figures to come from eMarketer, if your corporation is targeting Canadian consumers, focusing on Facebook would be a good idea. Nearly half of Facebook users in Canada reported checking the site more than once per day, with another 26% logging on daily. Only 38% of Twitter users logged on at least daily, vs. 55% of Instagram users and 19% of LinkedIn users. Usage rates averaged out to nine Facebook visits, six Instagram visits, five Twitter visits and two LinkedIn visits weekly.
And eMarketer estimates that by the end of 2015, 19.9 million people of all ages in Canada will use social networks at least once per month, including 18.5 million who will use Facebook and 6.8 million who will use Twitter.

The latest piece of research from Kinetic Social reveals that direct response ads and video-based messages are finding large audiences on Facebook. Mobile accounted for 49% of ad buys by Kinetic Social clients during the fourth quarter of 2014, with 37% buying desktop-only and 14% dabbling in both. CTRs for mobile were nearly quadruple those of desktop.
Until next time….
The Useful Social Media team.