Why consumers unlike a brand. How sharing images continues to dominate social network sharing and how successful has Instagram been in the UK?

A new infographic from Quicksprout illustrates how visual content continues to be the materials of choice when it comes to sharing. All brands should have visual content at the heart of their campaigns. There has been for some time a recognised trend with visual content – most notably video – being the most shared content across the social media space.

The Race for Shoppers

If your corporation targets particular racial or ethnic groups with its marketing campaigns, new data from the US Census Bureau will make for interesting reading. The US market itself has changed out of all recognition over the last few years. Savvy marketers need to take these changes into consideration when designing their marketing messages.

Not Liking a Brand

Your brand may have gotten used to counting Facebook ‘Likes’ but does your business also pay attention to those that also unlike your pages? It seems that consumers can be fickle when it comes to brand loyalty across Facebook. The latest graphic from GlobalWebIndex (GWI) illustrates this point with figures showing the level of ‘unlikes’ last month. “What’s clear from our research is that brand following is pretty volatile. If we look at Facebook, for example, some 29% of active users might have followed a new brand last month but almost as many – 24% – stopped following one. It’s a similar situation on Twitter: nearly a quarter followed a new product or brand last month but some 15% clicked the unfollow button.”

Says Unifiedsocial: “Sometimes as marketers we get so caught up in clicks and KPIs that we forget that each one of our campaigns has its own unique personal traits, lifespan and dare I say, personality. And it’s these very characteristics that ultimately define the composition, characteristics, goals and benchmarks of success for each project. So in this spirit, we thought that it would be a good exercise to think of your initiatives as you would think of a client, consumer or acquaintance — as individuals. Here are 4 campaign personality types you should know, and some tips on how to make them fruitful.” 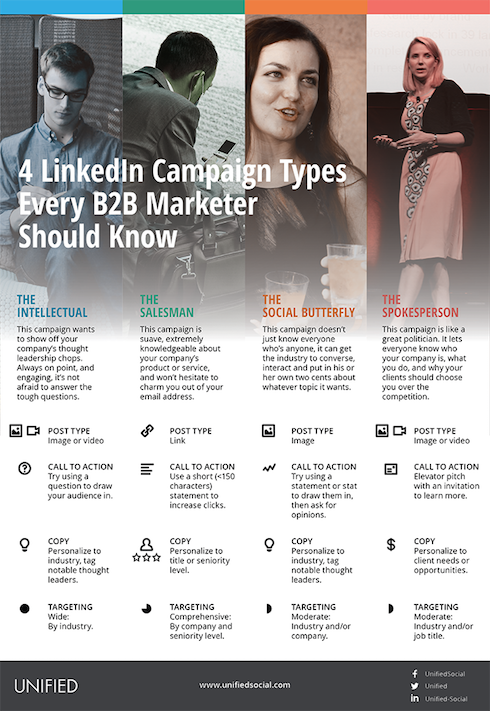 Instagram Ads a Success in UK
Retailer John Lewis turned to Instagram to change perceptions of its brand among a younger, fashion-conscious female audience. It partnered with some of Britain’s hottest young bloggers for a six-week campaign that brought its Christmas party line to life through photo shoots, “get the look” videos and Hyperlapse videos.
Young Smartphone Users Access Social Media
Fully 91% of smartphone owners ages 18 through 29 used social networking on their phone at least once over the course of the study period, compared with 55% of those 50 and older (a 36-point difference).
Twitter Launches Curator
Curator was built to allow media publishers to search, filter and curate Twitter content that can then be displayed on web, mobile and TV. Those who have been testing Curator have seen strong increases in audience engagement, participation and attention.
Until next time….
The Useful Social Media team.