Brands have been witnessing a shift in how their customers locate their businesses. Where organic search was king, visual product discovery is now highly popular with Pinterest leading the way.

Wouldn’t it be perfect if your brand could develop high levels of advocacy and positive sentiment with little or no investment in a marketing strategy? It appears this is precisely what is happening on Pinterest. The latest research would suggest that users posting brand collateral on their scrapbooks drive a massive 70% of brand engagement.

Curalate commented: “The sheer volume of images generated on social media is staggering. Between Facebook and Instagram alone, consumers are generating nearly 2.5 billion images every week. Images are becoming so core to the social experience, that Facebook just revamped its feed to be more visual. Add into the mix Pinterest, Tumblr, Polyvore and Wanelo, and it’s clear that consumers increasingly prefer to communicate with pictures rather than words.”

Fashion brands in particular have been witnessing this trend for some time. The connections that social media has and its sharing foundation is a superb fit for visual marketing over networks such as Pinterest. Brands need to think about how they can join these conversations without upsetting the dynamic that has clearly developed. This is how ESPN approached their Pinterest campaign with their Cold List images. Read more about how ESPN leveraged the power of the images they generated in the USM feature.

And brands are showing how effective Pinterest can be. Last year Sony and the jewellery retailer Boticca both showed how Pinterest had become essential to their e-commerce channels, with the site outperforming Facebook with brand discovery and more importantly, improved conversions. CEO and co-founder of Boticca Kiyan Foroughi said: "On Pinterest users are in discovery mode, looking for the best, most interesting products and designs the web has to offer. On Facebook, people are primarily looking to socialise with friends and consume video and photo content.”

Understanding the demographics of the Pinterest shopper is vital if your brand is to fully engage with the right groups across this network. Research by Docstoc and Pew Internet reveals that the profile of Pinterest users includes college educated, middle to higher earners. This is important to appreciate, as the most successful visual brand will have a clear demographic profile of the consumers they are targeting with a specific campaign. 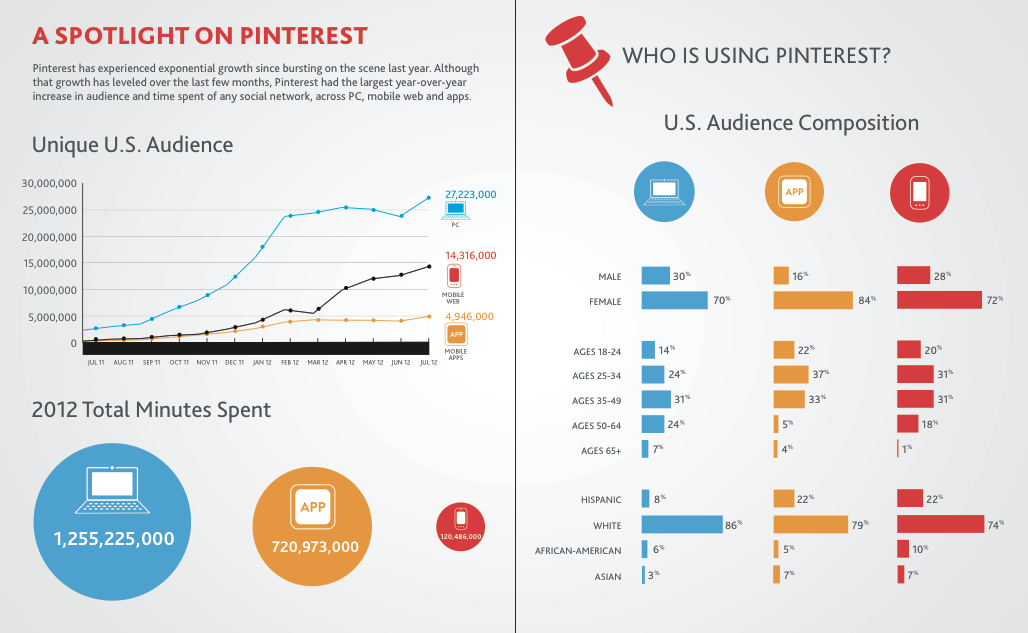 Brand should also look to further segment their customers across the social media networks they are targeting with their messages. Both Pinterest and Facebook seem to offer similar image-lead marketing opportunities, but as we have seen, consumers tend to pin brand collateral themselves on their Pinterest accounts.

Facebook users tend not to be in a state of mind to buy goods when they are updating their profiles. Whereas, Pinterest users tend to use the site as a shop window with their credit cards at the ready. Corporations should of course also pay close attention to the data that the Pinterest Web Analytics application offers them.

For brands Pinterest presents a huge opportunity. The last EQ report concluded: “Compared to Q4 2012, the traffic generated by the collection of social networks evaluated in the EQ is almost universally flat or declining. But the outlier is Pinterest, which sent more traffic to ecommerce websites in the first quarter than it did in the retail heavy fourth quarter. Gross numbers are still small, of course, but it was surprising see that Pinterest generated more than double the traffic than Twitter. Pinterest also had the highest average order value ($80.54) among social networks. In comparison, the average order for buyers from Facebook was $71.26.”

A brand strategy that takes the propensity to share visual materials is now more important than ever. Consumers clearly want to share visual material across their social networks that are often branded. Corporations that make this sharing exercise as easy as possible will see a significant uptick in their traffic and ultimately their conversions.

Visual Social Part 2: Successful visual social media is all in the mind
Visual social in 2014 Part 1: The eyes have it…
The Social Media for Customer Service Summit 2013