With Facebook restating its commitment to viewed impressions for ads, how should corporations leverage their paid ad campaigns?

Who, where and when are the watchwords for ads especially those placed on the leading social media networks. In a move welcomed by the industry, Facebook has acknowledged that all ads are not equal and that simply tracking served ads is simply not enough.
“At Facebook, we agree that viewed impressions are a better way to measure ad delivery,” the company stated in a press release. “The reason is simple: if an ad is viewed it has a greater chance to drive value for an advertiser. That’s why we use viewed impressions to measure ad delivery across desktop and mobile.”
Facebook continued: “For years, served impressions have been a standard unit of measure when it comes to digital ad delivery. Even today, many publishers use served impressions as their standard for measuring media. However, measuring served impressions means there’s often a big gap between the number of ads served and the number that are actually seen".
Measuring viewed impressions is a better solution. Here’s why:
“Any effort by marketers to reach consumers is driven by the concept that their message has the opportunity to be viewed, which is why we align with Facebook on the their approach to viewability. By working closely with our media partners like Facebook and the Media Rating Council we hope to lead the charge on setting standards for viewed impressions that would drive the industry in the right direction and, in turn, ensure our clients get the most return on investment,” commented Julian Zilberbrand, EVP Activation Standards, Insights and Technology, ZenithOptimedia Group.

The viewability of ads is vital none more so than on mobile channels, which are consistently showing massive growth. Looking at the financial results from Facebook over the last few quarters, it’s clear that mobile is playing a huge role in their increasing revenue numbers. Indeed, 745 million mobile users a day access Facebook delivering ad revenues of over $2.5 billion in just Q4 of last year. 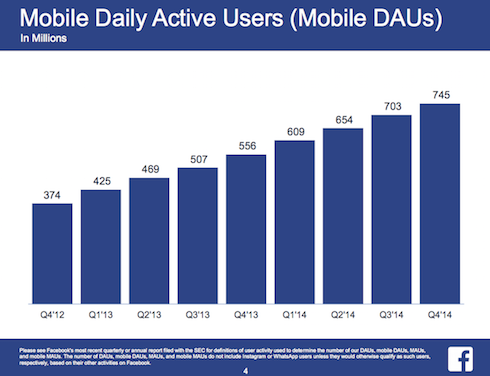 Reporting earlier this year eMarketer reinforced the move to mobile ad delivery stating: “Over 70% of all Facebook users globally will be mobile this year, and by 2018, more than three-quarters of the social network’s audience will access the platform via mobile phones on a regular basis, totalling 1.34 billion users. It’s no secret that mobile has been the key driver of growth in Facebook’s advertising business in the past 12 months. In 2013, 45% of Facebook’s $6.99 billion in advertising revenues worldwide came via mobile ads. This year, mobile ads will account for 73%—or $10.90 billion—of the social network’s ad revenues worldwide, eMarketer estimates.”
“Facebook has been a leader helping marketers to transition to mobile advertising,” said Debra Aho Williamson, principal analyst at eMarketer. “Because the Facebook experience is basically the same across devices, advertisers don’t have to reinvent the wheel to place mobile advertising. As Facebook’s user base shifts even more heavily toward mobile, it is well positioned to see increasing ad revenues from this channel.”
The important question to ask in the face of what can seem like impressive and overwhelming figures is are these massive numbers of mobile ad viewers actually converting? The answer to that question is not as many as corporations would like.
Research from Marin Software suggests that while 63% of clicks on Facebook ads come from mobile, only 34% are conversions – and this is over the same Q4 2014 period where Facebook posted its stellar ad revenue figures. The research suggests that organic search still has the edge when conversions are considered.
Marin CMO Matt Ackley commented on their findings: “The disparity points to the value in Facebook advertising being closer to television or print than performance-marketing channels," he said. "Clicks on mobile ads are greater than desktop ads, indicating Facebook mobile ads are a great way for a retailer to build brand awareness and reach consumers on mobile devices. Consumers are not device or channel exclusive. They move from search to social sites. Recognizing and leveraging Facebook as a branding tool in conjunction with performance-marketing channels allows retailers to build demand and then capitalize on the demand much more efficiently.” 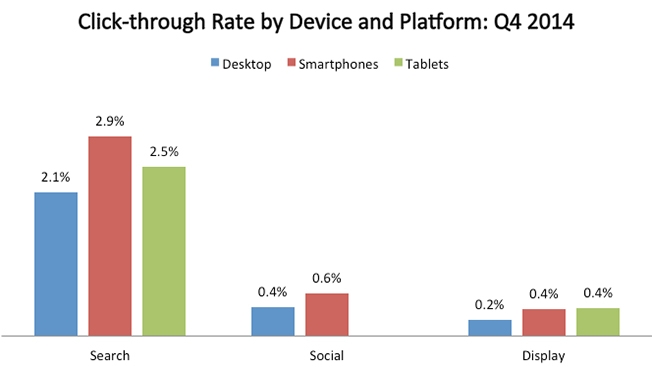 Clearly the use of ads – especially Facebook ads – on mobiles is rapidly rising. Whether these marketing messages are actively converting is another matter. Research from TRUSTe further complicates matters, as they conclude that nearly 70% of US smartphone users are concerned about active tracking to ensure better ad targeting.
"Our research shows that the majority of Americans are still uneasy about having their online activity tracked for use in targeted ads, mainly because they feel like they have limited control," said Chris Babel, CEO, TRUSTe.
"The good news is that awareness of the AdChoices icon, which gives users more control over their ad experience, has risen substantially and continues to have the potential for positive impact on consumer attitudes. As more and more consumers understand how their information is being tracked and the choices they have to opt-out, the more we'll start to see consumers embrace the concept of Online Behavioural Advertising and realize the benefits, such as receiving great deals from their favourite online retailers."
The rules of engagement when developing social media marketing campaigns have been coming into focus for some time. The rapid development of the mobile channel has, though, created a new platform that consumers and brands have yet to fully appreciate.
Consumer behaviour towards mobile social media ads will evolve to become the norm when brands want to communicate a marketing message. The key is to understand the target audience, which has always been at the core of all ad marketing for decades.
[Image Source: Freedigitalphotos.net]