The Art of Visual Social Media Pt1: In the Eye of the Beholder

Once upon a time a couple of blokes – and it probably was the male of the species – started leaving messages for each other on an electronic bulletin board. They would have had no idea of the significance of what they were doing; this boys’ toys activity would eventually evolve into social media as we know it today. The ultimate expression of this would probably be Facebook, but there are another strata of network emerging. A sub-group of the mainstream social media is the visual social network. The ability to share images as well as words is becoming increasingly powerful to many corporations.

The principle seems to be that people engage better with images they can see and hear, and figures from people who have mounted substantial campaigns bear this out. Patrick Smith heads up new consultancy Boothchat, which specialises in the visual, and he points to engagement from a visual campaign in New York for software company McAfee during the ISC East show. Total reach of the content was 136 times the Twitter audience or 13,600%; unique reach was 4 times the Twitter audience or 1,740%.
This is clearly not a trivial differential and it means doing something visual may be essential. In terms of generating buzz this has been demonstrated many times; the near-legendary Old Spice Guy videos, in which viewers were invited to send in questions and the model actually answered them and mentioned the senders by name, were particularly successful in taking the brand to a new generation.

Understanding the need for something visual and knowing how it can be done is different, however. Smith: “It needs a new way of thinking, it sometimes needs new equipment (although smartphone cameras are great for both video and still images) and it also needs a bit more time. Finally, however, it can be harder for marketing departments to own visual media in the same way - a viral photo is even harder to attribute than a viral tweet.

“We provide on the ground social media content and so video and still images are a big part of that and can dramatically increase engagement. What is needed is a dedicated team to create the content (we provide one, but it can be in-house) and the tools to distribute and brand that content. If it's done correctly it can work very well.” 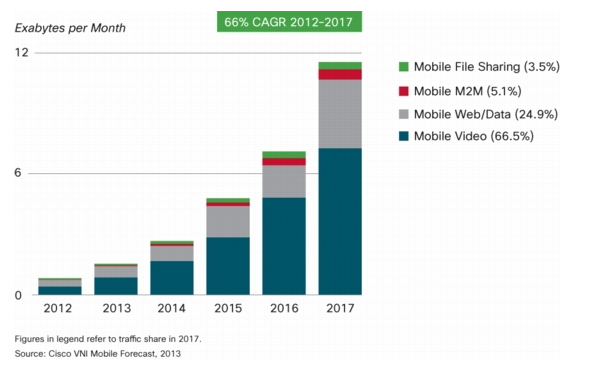 Mobile Video Will Generate Over 66 Percent of Mobile Data Traffic by 2017. [SOURCE]
It is important to note the ‘done correctly’ comment; although Smith advocates the use of smartphones sometimes it is notable that these rarely have the sophistication of their full-camera counterparts; unless someone is a specialist it is often very easy to tell when a video has been shot with something hand-held and only automatic focus.
Clearly having something visual like a computer show or other event with people and a location that lends itself to being visual is an advantage. Many apparel companies (for example) have been using visual networks for some time; British designer label Duchamp runs its own YouTube channel, and of course photographic agency Getty Images has had a tie-in with Flickr for years.

It’s different when, say, you’re running something non-visual as an Internet domain company. This was the task faced by Telnames, which runs the .tel domain. This works as an online listing service; people enter their details in and the format is relatively fixed so that it looks right on a mobile phone as well as on a computer screen.
He elected to promote through a Pinterest channel that would showcase the company’s clients’ own .tel sites. “Since we started using Pinterest [http://pinterest.com/telnames], which came out just at the right time, to feature a selection of our customers (we’ve got over 600 up there at the moment), we’ve pretty much got every business vertical covered to show potential customers what the results for them could be,” he says. “Additionally, with YouTube [http://www.youtube.com/telnames] we’re featuring everything from how-to videos and TV spots through to interviews with customers which provide a really cost-effective way of generating content for our other social media platforms and channels, from Twitter through to Facebook and Google+.”
Of course it’s not a matter of going visual at the expense of any other social media; cross-fertilisation is vital, but the picture-based networks have worked well. “Visual content has driven much more engagement and click-throughs when it’s been used and now using Google Analytics we can see which platforms are driving both traffic and enabling sales, enabling us to better test and refine our communications,” explains Hayward.
“Our mobile-ready infographic proved especially successful towards the end of last year when we launched our mobile app. Since the beginning of this year, Pinterest has been our sixth highest referrer to the website, only marginally behind Twitter, where we ran a promoted tweets campaign at the beginning of the year, so the importance of visual examples of real customers using the Telnames service can’t be underestimated for us.” 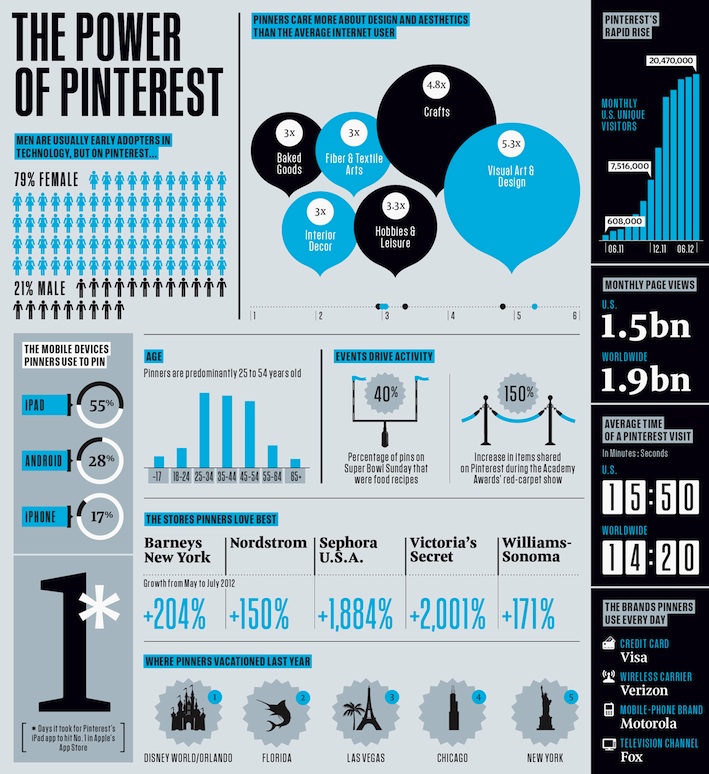 [SOURCE]
The lesson to be learned here is that it doesn’t have to be about something overtly and obviously visual. Instances like PetPlan in the US, which makes excellent use of Pinterest, or the fashion houses, are fine and they do a good job but cute animals or good clothes are going to lend themselves to pictures.
Security software and Internet domains working through the visual media suggests that there is more to it than the obvious; given the right imagination and the right slant it is possible to develop visuals for something without such an apparent ‘in’.
The results from both companies are very positive and back up independent research from companies such as Cisco that suggests visually oriented social media will continue to outperform the text-based variety for the foreseeable future.
In part 2 of this series you will see how to develop a visual social media strategy and how this strategy can be measured.