What happens every fall?

The leaves turn, pumpkin pandemonium begins (again) and Apple holds a super-secretive press conference to unveil their latest innovations. This year’s event came and went exactly as expected, sort of, but how were these new products received in real-time?

We were curious so we took a look at social media and web data between 9 a.m. and 1 p.m. PST to gain insight into the public’s reaction as announcements were made.

Add to that a handful of technical glitches, over 5K individual article mentions (by news, web, blogs and comments), and approximately 300K Twitter mentions later, and we’ve been able to see more than just how people are reacting; we’re seeing why.

Take a look at the chart below. It depicts the volume of the conversation, divided by “hot” topics, throughout the entirety of the #AppleEvent. The most talked about topics are:

The biggest expected announcement of the event, a new iPhone6 (Light Pink), took second stage on social media due to the outages and translation errors online viewers experienced while live streaming the conference on their Safari Browser.

Apple gave us not just one iPhone6, but two! The conversation surrounding this “big” news was dwarfed by technical issues followed by the announcement of the Apple Watch.

It may seem that the Apple Watch has been incredibly positively received with high volume of conversation, which isn’t inaccurate. However, in our opinion, a large piece of the puzzle is missing because emotional intensity and emotional drivers impact behavior. 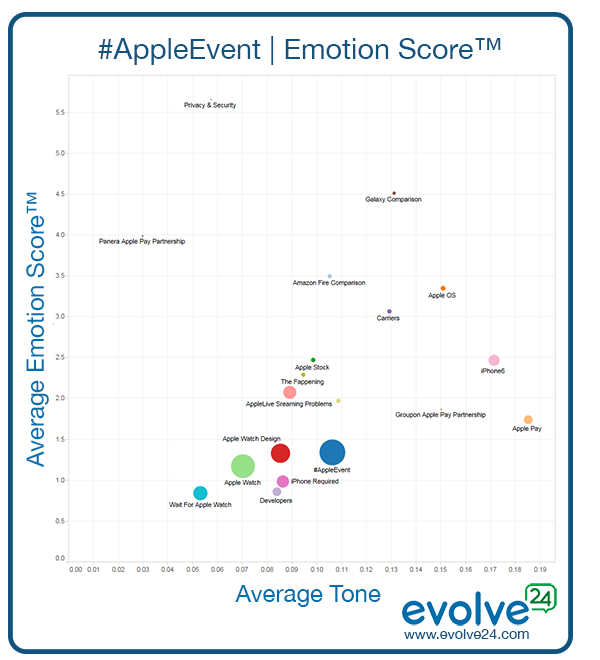 From this chart alone it may seem that Apple Pay and the iPhone6 and iPhone6Plus are more positively received than the much-anticipated Apple Watch, and if you drew that conclusion you’re absolutely right, with one small caveat.

The reason behind the low emotion score surrounding the Apple Watch is two-fold:

In the conversation, many have questioned public adoption of a mobile wallet, saying that the concept is, “too green for many users,” and that, “privacy is still a very large, often vaguely answered issue”.

The chart above shows that people are less emotional yet considerably positive about Apple Pay. This suggests that even though the concept (or application) is new, the technology is not. We see this as a potential win for Apple to put their stamp on existing technology.

Alternatively, negative attention surrounding Apple Pay is equal parts fear (about security and privacy) and the unattainability for the “everyday consumer”. Partnerships with Apple Wallet tend to skew toward ultra-premium brands and elite purchasers, rather than “Average Joe”.

Putting It All Together

In the context of this short time period, we have identified these data-driven insights:

This article originally featured on Evolve 24's blog. You can access the original article here

Become a social business! #CSMEU is the largest and most senior meeting of social media and marketing execs, giving you unrivalled insight into how social can drive your business growth & competitive advantage