The demand for skilled craft workers such as welders and electricians is the most significant constraint facing the current pipeline of petrochemical projects in the US Gulf Coast, according to Peter L. Cella, president and chief executive of Chevron Phillips Chemical.

Speaking at the IHS Chemical 30th Annual World Petrochemical Conference in Galveston, Texas on March 25, Cella remained optimistic about the growth prospects for the industry but stressed that companies need to invest in educating the next generation of skilled professionals.

The looming skilled craft labor shortage in the region was a major theme at the event even amid worries about the effect of low oil prices and the expected reductions in project capital spending.

"There is a shortage of qualified labor to build, operate and maintain the plants,” Cella said. “We have an immediate need for electricians, welders, millwright and construction personnel to build plants. Longer term, we need instrumentation technicians, process engineers, operators, project managers, scientists to maintain these plants."

Industry set to grow
The workforce shortage is projected to persist in the next few years as more workers retire and the industry ramps up investment in megaprojects on the back of cheap shale feedstock.

Some 40% of Chevron Phillips’s employee base, for example, will be retirement eligible in the next five years, according to Cella.

"Even with the drop in oil prices, US chemical manufacturers enjoy a distinct competitive advantage in global markets, which will help them 'grow the pie' for other sectors of the American economy,” said Cal Dooley, president and chief executive of the American Chemistry Council (ACC).

For US ethane crackers to be more competitive than naphtha crackers in the export market, the key ratio of the crude oil price ($/bbl) to the natural gas price ($/mmbtu) needs to be greater than 7. The current ratio comes around 20.5. 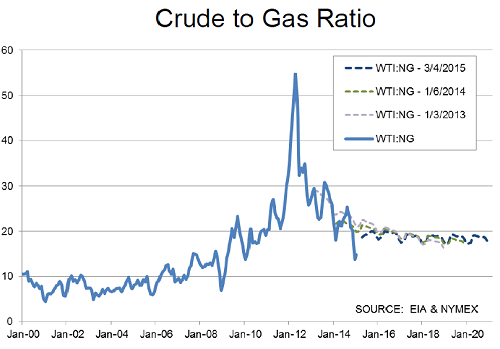 Chemical companies have begun or are planning 223 shale-related projects in the US to date, representing a cumulative investment of $137 billion.

Those projects will add 700,000 permanent new jobs by 2023. This investment will also have a significant impact on the economy at large, as every new job in the petrochemical industry creates 10 jobs elsewhere, Cella said.

The current pipeline of ethane-based petrochemical projects alone will add more than 10 million tons/year of new ethylene capacity in the US by 2019, according to Petrochemical Update estimates.

These $6 billion worth of projects are creating 10,000 construction and 400 long-term jobs. Both projects are expected to be operational by 2017.

Skilled laborers are the new 'gold-collar' employees
According to Cella, it is time for the petrochemical industry to reboot its vocabulary and look at skilled workers as “gold-collar” rather than blue-collar employees.

"These jobs have attractive pay, low-cost education and training to get certified for, and a quick payback on education expenses,” he added. “To me, gold collar perfectly sums up the opportunities for young adults driven by the manufacturing renaissance that is happening at the same time retirements are happening."

Skilled craft jobs, which typically require technical degrees or training, are seeing wage increases in the US on the back of growing demand for these trades across the industry.

Average annual salaries – not including overtime, per diem and other incentives – for skilled craft workers ranged between about $51,500 and $66,500, according to the 2014 craft professional survey by the National Center for Construction Education and Research (NCCER). Project supervisors and project managers topped the list, earning more than $79,000 and $91,000, respectively.

"Our process operators can make over six figures when you include overtime and bonuses," Cella said.

Getting qualified for these jobs is also one of the lowest-cost education options available, according to Cella.

"Private schools and out-of-state universities charge even more. The payback from a technical or two-year program is a fraction of a college degree,” Cella said. “For a four–year degree, it takes about six years to get any payback from education expenses if the graduate even gets a job. For a technical job, the payback generally happens within two years." 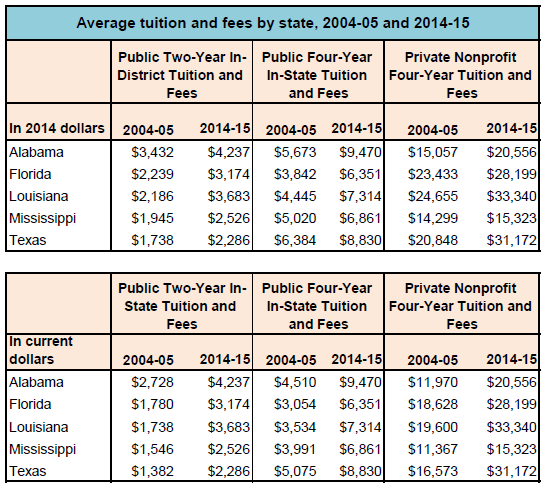 Source: The College Board, Annual Survey of Colleges

Investing in schools programs
Chevron Phillips is investing in education programs – as early as middle school – to raise awareness about technical careers and bring more young workers in the petrochemical industry.

"We are trying to teach kids how to make informed decisions about what kind of compensation is available, how to get credentials, what kind of careers exist," Cella said.

In Texas, eighth graders now have to pick a curriculum for high school to begin preparing for careers after graduation. The plans include business and industry, arts and humanity, public services, STEM (science, technology, engineering and mathematics) or multidisciplinary studies.

The plans were created as a part of House Bill 5, which in 2013 introduced substantial changes to the state's curriculum and graduation requirements, assessment program and accountability system.

"We have been able to get the message out to 30,000 eighth graders in the Houston area about what kind of jobs exist in this industry, what they pay and how to get certified,” Cella said. “We are not just emphasizing skilled labor, but all the jobs needed in our industry. We discuss everything from construction to process operator, to PhD scientists."

Cella said Chevron Phillips is also working with schools to make sure they have the faculty they need, the equipment necessary to teach hands-on classes like welding, and funding scholarships to make sure students who can’t afford fees of a two-year program can take the classes and get certified.

"We are in the early days on this so we won’t know for a few years, maybe 2017, if we are actually getting graduates out of this program and if it is working,” he said. “But I feel good about it. We are going to need these workers."