A flurry of Gulf Coast LNG export facilities is set to raise U.S. domestic gas prices in the coming years and developers are optimizing liquefaction technology to capitalize on growing arbitrage opportunities between U.S. and global gas markets, analysts said.

The U.S. shale revolution has spurred a raft of Gulf Coast LNG export projects which will see the U.S. become a net exporter of gas in 2018 and play a key role in the global gas markets in the coming years.

The U.S. started to export LNG from the lower 48 states in February 2016, when Cheniere brought online its 1.4 Bcf/d Sabine Pass export facility in Louisiana. Around 5 Bcf/day of additional export capacity is expected to be completed by 2020 to export LNG to large markets in Asia, including China and Japan. Those terminals could make the U.S. the world's third largest exporter of natural gas by 2018, according to the U.S. Energy Information Administration (EIA).

Fears of domestic gas price rises have prompted industrial energy consumers to oppose what they see as excessive growth in LNG export capacity.

"Low cost natural gas is the driver behind the 264 chemical industry-related projects that represent over $161 billion in new investment announced since 2010," IECA said.

Following a surge of applications, seven U.S. LNG export terminals have been approved and are currently under construction for a total capacity of 10 Bcf/d, according to the Federal Energy Regulatory Commission (FERC).

Six of these projects are on the Gulf Coast and four more Gulf Coast projects have been approved by the FERC but are yet to commence construction, representing an additional capacity of 7 Bcf/d. 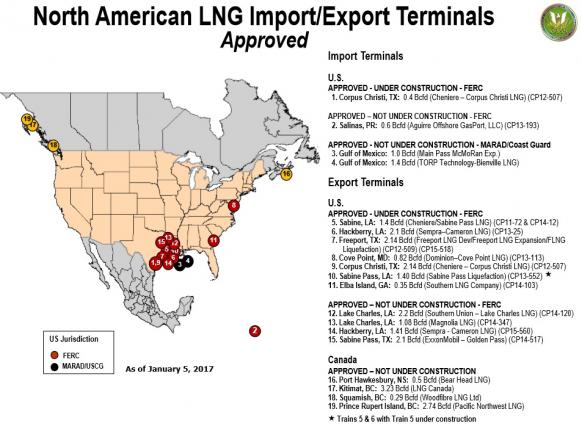 Among the approved projects yet to commence construction is the Golden Pass LNG export terminal in Sabine Pass, Texas, being developed by ExxonMobil and Qatar Petroleum.

The Golden Pass project includes the construction of compression and looping facilities in Texas and Louisiana that will make the Golden Pass Pipeline’s existing pipeline facilities bi-directional and enable it to transport up to 2.5 billion cubic feet per day of domestically-sourced natural gas to the export terminal project for liquefaction and export.

Estimated cost of the project is $10 billion and construction is expected to take around five years after the final investment decision is made.

“What makes the U.S. so attractive is that these projects are mainly all regasification conversion projects,” Madeline Jowdy, Senior Director, Global Gas & LNG PIRA, a division of S&P Global Platts, told Petrochemical Update.

“Many of these projects are happening at terminals that were built for imports of LNG. They already have LNG storage tanks, the marine facilities, operating permits, and in most cases pipelines that can be reversed to take the equivalent amount of gas out of the country as opposed to bringing it in. Their major expense is adding the trains to make them liquefaction plants,” she said.

As a result, industry participants are now focusing on cutting the cost of liquefaction technology, Jowdy said.

“The liquefaction process is expensive and companies look at cost cutting on EPC [engineering, procurement, and construction] fees, labor, input and steel, but the basic technology has basically not changed,” she said.

Tellurian announced April 3 it had submitted a formal application to the Federal Energy Regulatory Commission (FERC) for its 26 million tonnes per annum (mtpa) (3.6 Bcf/d) Driftwood LNG export facility near Lake Charles, Louisiana and a 96-mile pipeline connecting the facility to interstate pipelines.

Tellurian expects to begin construction of the Driftwood LNG project in 2018 and produce first LNG in 2022, with full operations beginning in 2025. The company estimates the EPC costs for the LNG export facility at between $13 billion and $16 billion.

Given the large number of LNG export facilities currently planned, analysts do not expect all of the projects to be built.

Assuming a 90% utilization rate, the projects currently under construction would represent around 9 to 10 Bcf/d of exports by the early 2020s. Completion of the approved projects would raise export capacity to between 15 and 16 Bcf/d by the mid-2020s.

The EIA’s latest reference case assumes that U.S. LNG exports could reach about 10 to 11 Bcf/d by 2025 and exports could peak at around 12 to 13 Bcf/d from 2030 onwards. The International Energy Agency (IEA) has estimated U.S. LNG export capacity could rise to around 10 Bcf/d by the early 2020s, according to its latest medium-term gas market report published in June 2016.

Most of the medium-term demand will come from Asia-- not necessarily the traditional LNG importers like Japan and Korea, but rather other non-OECD Asian economies such as China, India, and the Association of Southeast Asian Nations (ASEAN) economies, the IEA said.

“Taking into consideration the number of projects currently being built and their capacities, as well as the analysis from both the U.S. EIA and the IEA, a conservative but credible number is for the U.S. to achieve U.S. LNG export volumes of above 10 Bcf/d by the early part of next decade,” Carlos Murillo, Economist at The Conference Board of Canada, told Petrochemical Update.

“There is of course some upside potential, depending on many factors that could push that number closer to the 15 Bcf/d mark by the mid-2020s,” he said.

Currently, most LNG is traded under oil price-linked contracts and U.S. LNG exports are at their highest levels when the oil-to-natural gas price ratio is highest. U.S. domestic spot gas prices are less sensitive to global oil prices than supplies from other countries, creating a market opportunity for exporters.

“The era of big is over. Buyers [are] not buying big contracts right now. There is more liquidity so they do not have to,” Jowdy said.

“There is more spot availability than ever before. We are definitely moving from a contract to spot market. 10 years ago, maybe 8% of the market was spot. Now, more than 25% of the market is spot,” she said.

S&P global Platts predicts short-term contracts could account for as much as 43% of global LNG trade by 2020 and new Gulf coast price references have been introduced in response to the rising export activity.

Last month the Intercontinental Exchange (ICE) announced it will begin trading a first-ever U.S. LNG futures contract that will be cash-settled against the Platts LNG Gulf Coast Marker (GCM), a price assessment which reflects daily export value of LNG traded free on board (FOB) from the Gulf Coast.

ICE will use Platts-derived U.S. GCM LNG forward curves for daily settlement purposes. The curves will have an initial tenor of 48 months.

"By providing the marketplace with a U.S. Gulf Coast LNG futures contract, along with the prospect of future additional products, domestic and international market participants now have a risk management solution that lays the foundation for a more effective means of hedging their spot and forward exposure, which will be particularly useeful as the global LNG market continues to evolve and grow,” J.C. Kneale, ICE’s vice president, North American power and natural gas markets, said in a statement.