Autonomous technology (AT) is moving into the trucking industry and could optimize logistics while reducing driver shortage and safety risks, analysts told Petrochemical Update.

Daimler's Freightliner Inspiration, the world's first self driving semi trailer truck, was unveiled in 2015 and is currently being tested on road conditions in Nevada. (Image: Daimler)

“Autonomous vehicles will be one of the most profound changes next to perhaps computers that we have seen in our lifetime,” said Robert Hooper, CEO of Atlantic Logistics.

Newest startup Embark received the necessary paperwork to test its AT truck on Nevada public highways in January. Both Uber- owned Otto and Daimler owned Freightliner Inspiration have been testing their AT prototypes as well.

“While most of the spectacle has been around passenger vehicles, we believe that commercial trucking, the backbone of our economy, stands to reap untold benefits by deploying autonomous trucks - particularly during the “long haul” stretches,” Embark states on its website.

More than 30 companies are now researching and developing autonomous vehicle technology, according to CB Insights.

Driverless trucking would eventually halve industry costs, according to investment group Morgan Stanley, who declared 2017 “the year of the autonomous truck” in a January research note. Morgan Stanley went on to write that the freight industry could save as much as $168 billion annually by adopting AT.

“Also, many trucks already have speed limiters due to safety and fuel efficiency, many max out 65 miles per hour (mph). For every mph over 55 mph, you reduce miles per gallon (mpg) consumption by .1. So, a differential of 55 mph to 70 mph would save 1.5 mpg per truck. That will add up to a tremendous amount of savings when you multiple that across every truck in the US.”

Technological efficiencies would lead to a reduction in fuel usage as well, Hooper explained.

“Efficient drivers add 30% to their fuel efficiency,” Hooper said. “Well the computers will be efficient…no feathering, no rough acceleration, etc. So, we should see dramatic reductions in fuel usage by trucks. Of course, there will be shift from trains to over the road when the trucks are able to drive 24/7 with no driver constraints or costs as well.”

The cost savings when a full-time driver is no longer needed is substantial, Hooper said.

“Driver pay averages $35,000 a year for short haul operations, and up to $125,000/year for long haul and specialized deliveries,” Hooper said.

The cost to add AT technology to a big rig has been estimated at $23,000 and higher, according to consulting firm Roland Berger. Insurance costs will rise as well.

Insurance coverage for autonomous vehicles will bring $81 billion in new premiums to the U.S. auto insurance industry over the next eight years, driven by risks related to cybersecurity, software and hardware and by the need for additional public infrastructure coverage, according to a report from Accenture and Stevens Institute of Technology released in May.

Law enforcement regulations, training and potential hacker threats are some of the other costs challenges the industry will need to overcome, the American Transportation Research Institute (ATRI) said.

However support and oversight are growing. The U.S. Department of Transportation has created a committee on automation led by General Motors CEO Mary Barra and Los Angeles Mayor Eric Garcetti.

One weak link is the infrastructure needed to support AT vehicles of any kind, the ATRI said. Lane markings must be visible to video camera systems. Signage must be correct, visible and appropriate. Pavement quality may also cause issues.

The American Chemistry Council (ACC) estimates that the announced investment of more than $160 billion over the next decade will help create 426,000 direct and supply chain jobs in the U.S. economy. Announced new U.S. chemical and plastics projects are expected to increase production by 53 million tonnes of new chemical output per year, requiring an addition 1.8 million shipments per year by 2020.

This story is at risk, however, due to inadequate transportation infrastructure. The chemical industry will likely incur an additional $7 billion in transportation costs annually related to congestion and delays by 2025 if the transportation network is not upgraded and expanded to meet the volumes expected over the next decade, according to an analysis by PricewaterhouseCoopers (PwC) issued in May.

Truck driving may become a more attractive career as automation relieves some of the stress of the job, and the new technology may incentivize younger individuals to pursue a career in trucking, ATRI said in a recent report on AT truck trends.

The trucking industry faces not only a shortfall of qualified drivers, but also an aging workforce. The American Trucking Association (ATA) predicts that by 2024 the driver shortage will increase from a recent 48,000 driving jobs to 175,000. ATRI said the number of truck drivers between the ages of 25-34 has dropped by nearly 50%. In many cases, the void has been filled by older drivers.

Drivers will still be needed regardless of the type of truck, but roles will evolve with more emphasis on shipper/client relationship, equipment management, route management, cargo management, and hazmat tasks.

"Even in transporting chemicals and hazmat materials, semi-autonomous trucking will make a huge impact on productivity," Hooper said. "Drivers will be able to rest, work on paperwork and their iPad while the truck is driving and then take over as necessary. Driving is hard work. Drivers are gone for long periods of time and have to be alert for several hours. Semi-autonomous trucking will allow drivers to be more productive and get needed rest."Top

Trucking Industry Challenges and AT solutions

The technology is classified as Level 3 by the U.S. National Highway Traffic Safety Administration (NHTSA), with Level 4 being full automation and no driver. Level 3 means vehicle systems can control all driving tasks under limited conditions, but a driver must be able to assume operations when prompted.

Daimler’s Highway Pilot system uses radar sensors and cameras to detect objects and lane markings around the truck and take over steering, braking and accelerating from the driver.

“Due to the nature of transporting petrochemicals and hazmat regulations, it will be much longer if ever before chemicals can be transported without a driver.
“It may be that if you are running with autonomous trucking, you will find it safer and more productive, but you still have to have a driver in case of issues, and for hazmat certification laws. 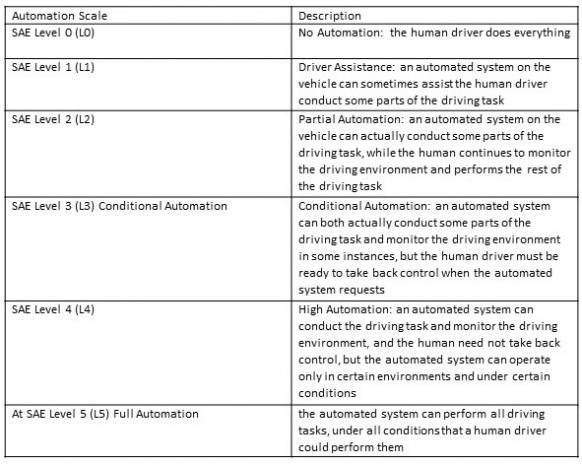