Our pick of the petrochemicals news you need to know.

Gulf coast refinery output reductions will be above average in the first half of this year, mainly due to a higher-than-average number of planned outages in January-March, the US Energy Information Administration (EIA) said February 28.

While the number of planned outages in the Gulf Coast region in the first half of 2017 are higher than average, regional inventories appear to be sufficient to offset lost production from those planned outages, EIA said.

"With Gulf Coast gasoline and jet fuel inventories at their highest level in 10 years, distillate inventories close to the 10-year average, and high levels of gasoline and distillate exports that could be diverted to domestic markets to offset reductions in refinery production, there are several options to make up for production losses due to planned refinery outages in the Gulf Coast," EIA said. 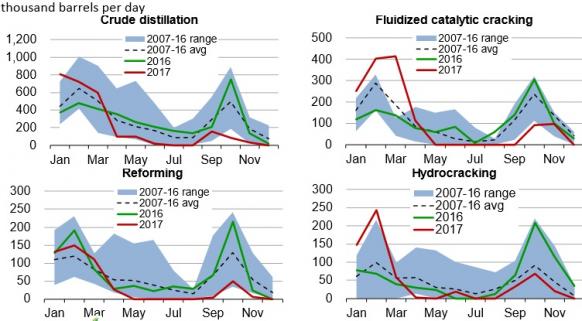 Gross refinery inputs averaged 16.5 million b/d in January-November 2016, slightly exceeding 2015 which was itself the highest annual level since EIA began collecting data in 1985.

Refinery production of gasoline and distillate has increased to supply growing demand in global markets and this has helped widen the U.S.' petroleum product trade surplus.

The Saudi Arabian Oil Company (Saudi Aramco) is to take a 50% equity stake in the Refinery & Petrochemical Integrated Development (RAPID) facility being developed by Malaysia's Petronas, Saudi Aramco said in a statement February 28.

Saudi Aramco and Petronas executives signed a Share Purchase Agreement (SPA) for the equity acquisition during a state visit by Saudi Arabia's King Salman to Malaysia.

The RAPID refinery, cracker and downstream petrochemicals complex is part of the Pengerang Integrated Complex (PIC) which is situated 400 km south of Kuala Lumpur, Malaysia's capital. Construction of the whole facility is 60%-complete and the refinery is expected online in 2019.

The RAPID facility will have the capacity to refine 300 barrels of crude per day and will produce a range of petroleum products including gasoline and diesel. The facility will also produce feedstock for an integrated petrochemical complex which will produce 3.5 million tons per year (mtpa) of products.

"Upon the completion of the transaction, subject to regulatory approvals and the completion of other associated agreements, both partners will hold equal ownership in selected ventures and assets of the RAPID project within the Pengerang Integrated Complex (PIC)," Saudi Aramco said.

Other projects being developed on the PIC site include a cogeneration plant, an LNG re-gasification terminal, a raw water supply project and a deep-water terminal.

Natural gas exports to Canada mainly originate from the U.S. states of Michigan and New York and are sent into eastern Canadian provinces. Rising production from the Marcellus and Utica shale formations has boosted output in the U.S. Northeast and expansions in pipeline capacity may lead to higher U.S. gas exports "over the next several years," EIA noted.

US monthly gas trade with Canada

Most of Canada's natural gas exports to the U.S. originate in Western Canada and are shipped to U.S. West, Midwest and Northeast markets.

Canada is the U.S.' largest energy trading partner, mainly due to Canada's significant crude oil exports. Canada provided 41% of total U.S. crude oil imports in 2016 and sales of Canadian crude oil to the United States reached more than $83 billion in 2014, according to EIA.

Total natural gas imports from Canada were valued at more than $5.9 billion in 2016, EIA said.

The cargo was aboard the 9,133 mt Gaschem Arctic vessel, which departed from the Morgan's Point terminal on February 4 and was expected to arrive in Rio de Janeiro on February 23, according to the report.

The vessel was carrying around 78,000 barrels of ethane, a source reportedly told Platts.

In May 2016, Braskem announced it had signed a 10-year contract with Enterprise Products to supply ethane based on Mont Belvieu pricing.