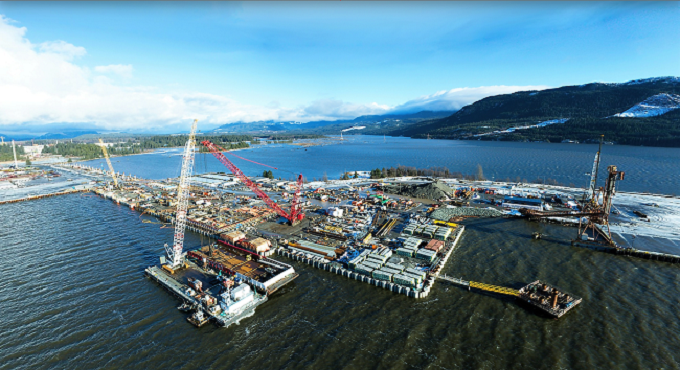 The LNG Canada consortium led by Shell has completed over 60% of the construction of an LNG processing plant and an export terminal that at a $31-billion estimated cost is Canada´s biggest private investment in history.

“The project continues to advance with the delivery of 24 modules in the first quarter and an additional 16 modules so far in Q2,” said David Constable, chairman and CEO at Fluor Corp. on May 6, during the first quarter 2022 earnings call, according to a Motley Fool transcript.

“Now 60% complete, the LNG Canada project remains on track to deliver its first cargo by the middle of this decade,” the venture recently said in its website.

The published scheduled shipping for mid-June 2022 includes the arrival from China of the trestle pre-assembled racks that will be part of the terminal.

LNG Canada has a 40-year export license and the facility will produce 14 million tonnes per year of LNG for export. The final investment decision was announced in October 2018.

In other recent developments, LNG Canada announced in April the appointment of Jason Klein as its CEO. Klein´s past roles included being responsible for the Elba Island LNG project near Savannah, Georgia.

With some 5,000 Canadians currently employed at the site, “the cumulative value of its contracts and subcontracts to local, Indigenous and other businesses to date exceeds $3.6 billion, and includes $2.8 billion to Indigenous-owned and local area businesses,” LNG Canada said.

Shell, with about 40%, and Petronas, with 25% are the biggest stakeholders in LNG Canada. Both PetroChina and Mitsubishi have a 15% stake while Korea Gas owns 5%.

There will be an estimated $23 billion in new government revenues over the project´s life, according to the British Columbia government, which approved LNG Canada’s application for an export facility on December 2015.

Natural gas supply will come from northeast British Columbia. The Coastal GasLink pipeline will transport natural gas to the export facility in Kitimat.

The Western Canada project faced pandemic-related delays around 2020 that also resulted in increased costs, and led to talks between the project owner and its contractor.

Braskem Idesa´s new partner in a $400 million investment in an ethane import terminal in Mexico will be Advario, part of the storage and logistic infrastructure company Oiltanking, Braskem said on June 14.

Construction is scheduled to begin in July and end in 2024. The venture is majority owned by Sao Paulo-based Braskem with Mexico´s Idesa group as minority partner. Braskem and Idesa have been partners since winning in a consortium a tender for a long-term contract to buy ethane from Mexico´s Pemex about 12 years ago.

The Puerto Mexico Chemical Terminal, as the ethane import terminal project will be called, will create 2,000 jobs during construction, the company has said.

The site will be connected to Braskem Idesa´s polymer complex through an 11-kilometer pipeline. Braskem Idesa built the Nanchital complex to produce ethylene based on the contract to purchase the ethane feedstock that it had won in public bidding.

Braskem Idesa´s ethylene and polyethylene complex in Nanchital has capacity to produce 1.1 million tonnes per year of polyethylene. It needs imported ethane because Mexican ethane production declined over the past decade and Pemex cannot supply enough feedstock to run the plant at capacity. The Nanchital plant has not run at capacity since completion in 2016.

A new jetty will also be built with an exclusive area for operations with cryogenic ethane, the company said. Advario's portfolio comprises world-scale storage terminals located strategically in key hubs across the globe, Braskem Idesa said.

Braskem had said in its first quarter earnings call that it planned to make an announcement of a partner by June. The Braskem investment is the biggest current foreign private investment in Mexico.

Braskem started to import ethane from the U.S. around the first quarter of 2020 but it is limited in the volumes that it can import due to logistics constraints that will be solved with the new terminal.

Ethane, fractioned from natural gas, is the raw material for the ethylene that is polymerized into the polyethylene material most commonly seen as plastic supermarket bags or milk jugs.

Kara Edwards, director of Transportation at the Chemistry Industry Association of Canada (CIAC), met on June 16 in Montreal with members of the recently appointed National Supply Chain Task Force that will seek to increase supply chain transparency, the CIAC said in June.

“The event included representatives from a variety of industries including manufacturers, retailers, railways, ports, road carriers and airports,” the CIAC said in a release.

The task force to study supply chain issues was set up earlier this year. It will produce a report with recommendations for the Minister of Transport by the end of September.

“CIAC has heard clearly that supply chain issues are persistent and have been negatively impacting its membership,” the association said.

The group´s work aims “to enhance transparency, reliability, capacity, and resiliency in the supply chain.”

Supply chain problems have been associated with pricing decisions. This led to extraordinary margins for some North American producers, but also to calls for more transparency.