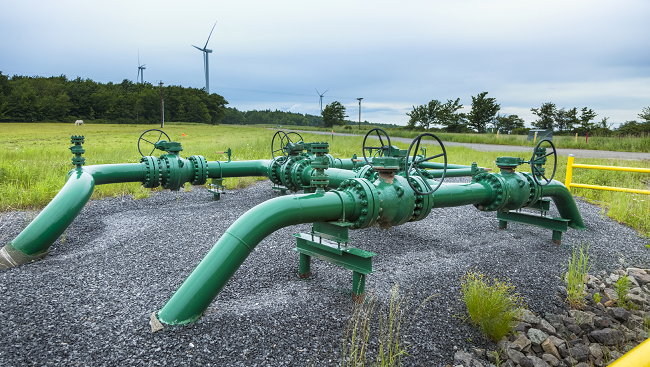 While most methanol producers on the US Gulf and West coasts are proposing large-scale methanol megaprojects to serve the export market, Primus Green Energy will be converting low-cost Marcellus gas into methanol at a small scale to serve growing regional demand in the US Midwest and Northeast.

Primus, which transforms methane and other hydrocarbon gases into methanol and gasoline, is developing a commercial GTL plant for methanol production from dry natural gas at an undisclosed location in the Marcellus.

When it comes on stream in the fourth quarter of 2017, the 160 metric ton per day (MT/d) facility will be the first methanol and first gas-to-liquids plant in the region. Primus plans to deliver up to four additional methanol plants in other North American regional markets with capacities ranging from 160 MT/d to 640 MT/d.

The Marcellus facility will be pre-engineered and fabricated offsite by China-based Jereh – which specializes in oil and gas EPC services, oilfield technology services and equipment manufacturing – and then transported to the project site for final assembly.

Fabrication is scheduled to last about 12 months and installation and commissioning will last three months, with project execution slated to start in September this year, Boyajian said.

Primus’ standardized modular GTL systems will be cost-competitive with the larger methanol plants located or proposed on the US Gulf Coast – whose capacity ranges between about 2,500 MT/d and 5,000 MT/d, Boyajian said.

The project will have smaller capital costs but will offer comparable opex to the much larger Gulf Coast projects, “in the range of a couple of cents more per gallon,” he said.

Methanol production costs on the US Gulf Coast are currently around 33 cents/gallon.

“Because our capex is so low, we can afford to put those units right next to the customers and right next to low-cost feedstock,” Boyajian said.

Building a methanol unit in the Marcellus region will also significantly reduce freight costs for regional buyers, who are looking for cost-competitive, flexible and stable local supply, he said. Transporting methanol from the Gulf Coast to Pittsburgh and Chicago costs about 20 cents and 25 cents per gallon, respectively, according to Boyajian.

Primus can buy gas in the Marcellus region for anywhere between 50 cents and $1 cheaper than producers on the Gulf Coast can, which is the equivalent of 5-10 cents a gallon for the methanol, according to Boyajian.

“So we are ahead of the game by 25-35 cents by positioning a plant in the Marcellus,” he said.

Demand in Primus’s target market is projected to be at least 500,000 metric tons/year, according to Boyajian’s estimates. The company plans to produce about 55,000 tons annually, or about 10% of the projected demand.

Overall, there are about 30 million metric tons of proposed new methanol capacity in the U.S. between 2016 and 2020 – mostly large-scale projects – with about 7 million tons of those likely to go ahead, according to Olivier Maronneaud, senior research analyst – Methanol/Acetyl at IHS Chemical.

By comparison, in 2015 producers added about 2.3 million metric tons of new methanol capacity in the U.S.

Much of the announced new capacity will be used in methanol-to-olefins (MTO) plants – mainly in China – which directly convert methanol into ethylene, propylene and derivatives such as or polyethylene and polypropylene.

Though most of the new units will serve domestic demand in the short term, limited regional demand growth for methanol - especially given that there is no MTO in the US and fuel applications remain small - means that North America will become a net exporter of methanol in early 2019, based on the pipeline of announced projects and demand forecasts, according to Maronneaud. 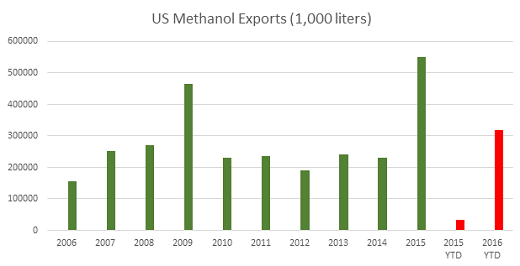 Source: Petrochemical Update. Data: US Department of Commerce and the US International Trade Commission.

Projected growth in U.S. methanol output and exports was based largely on the expectation that natural gas prices would stay significantly lower than crude oil prices and that Chinese demand for U.S. methanol would continue to rise fast.

Currently, both of those assumptions look less certain.

The key ratio of the crude oil price ($/bbl) to the natural gas price ($/mmbtu) – which measures the competitiveness of MTO production vis-à-vis naphtha crackers – has shrunk as oil prices over the last year have fallen from about $60 per barrel to around $40 per barrel in early 2016. 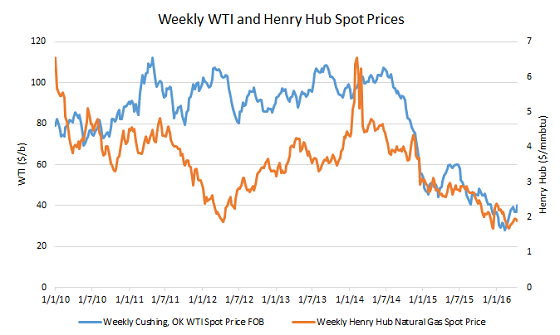 Meanwhile, U.S. methanol spot prices at the beginning of 2016 fell to their lowest levels in years, hitting 42-43 cents/gallon, with an average February price of 44 cents/gallon.

And while more MTO plants are starting up in China, new capacity has fallen short of expectations.

Dave McCaskill, vice president Methanol & Derivative Services at Argus DeWitt, expects to see a 2-3% increase in methanol demand in North America and Europe in the next few years, while demand growth in China – which represents about half of the world’s methanol demand – will slow to about 5-6%.

China will still likely add 5 million metric tons of capacity in 2016, but this is a far cry from the projected 7-8 million tons a couple of years ago, he added.

As a result, some of the projects announced when crude was over $100 per barrel are currently being re-evaluated.

In March, Valero announced that it had shelved indefinitely its proposed $700 million, 1.6-mtpa methanol plant in St. Charles Parish, Louisiana due to low energy and methanol prices, and the company’s inability to find an investment partner.

On April 19, Northwest Innovation Works said it is dropping its proposed methanol project in Tacoma, Washington, citing “business considerations particular to the Port of Tacoma site.” The company said it will continue to develop methanol projects in Kalama, Washington and St. Helens, Oregon.

Even as production margins have shrunk, low natural gas prices will remain a bright spot for U.S. methanol producers. Gas prices in the US will stay below $4/mmbtu in the foreseeable and will keep U.S. producers globally competitive, especially if oil prices rebound to $60 and above, according to IHS projections.