With the introduction of ten ethane cracker projects in the US over the next 5 years, around 90% of output from these projects would need to be exported to make them commercially viable. While the cost advantage ethane crackers enjoy over naphtha may have decreased with the declining price of oil, North America still offers a competitive edge over Western Europe and Asia. 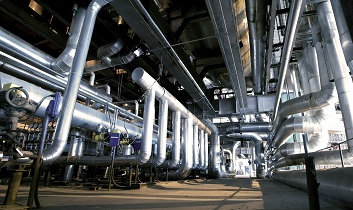 A year ago the outlook for the USA’s petrochemical industry offered great promise. Inexpensive gas prices led to a boom in the US petrochemicals market and operators sought to reap the rewards of record high ethane cracking margins. The net result of this was the introduction of ten new ethane cracker projects in the US market in just over a year, thereby potentially increasing the country’s ethylene manufacturing capacity by up to 50%.

New investments were largely driven by the potential for export abroad, with some experts indicating to Petrochemical Update that around 90% of output from the new projects would need to be exported to make the crackers commercially viable.

Ethane continues to enjoy a cost advantage over naphtha

According to Dr Kevin Swift, Chief Economist and Managing Director at the American Chemistry Council (ACC), “six months ago we believed that America enjoyed a 50-60% cost advantage over Western European naphtha crackers. Now we are looking at a 30-40% cost advantage”.

Figure 1: Ethane margins up until 2014 showed significant profits over naphtha 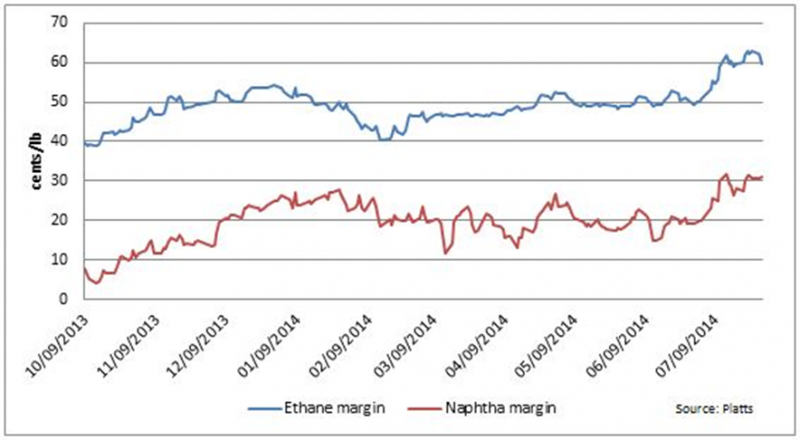 Paul Victor, acting CFO of Sasol, an energy and chemicals group leading the development of an ethane cracker in Louisiana worth $8.9 billion, has recently admitted that the company would not be able to achieve the 10.4% rate of return they were looking for if the price of oil remains below $80/bl.

However, Victor remains convinced that the project’s long-term fundamentals – including access to competitive and reliable ethane feedstock, arising primarily from the expansion of America’s shale gas industry – remain intact.

The US ethane cracker market as it stands now

Table 1 highlights new projects added to the ethane cracker pipeline over the past year. Cumulatively, the successful introduction of these projects would increase the US ethane cracker capabilities by 10.72 million tonnes. Considering that the USA produced 24 million tonnes of ethylene in 2012, this would mark a considerable jump in production to 2020.

The appreciation of the dollar

According to Swift, the appreciation of the dollar and the lower cost of oil have led to a reduction in manufacturing costs which in turn stimulates production, consumer confidence and an overall healthier economy.

Whilst the buying power in the US market is expected to pick-up over coming months, the dollar to Euro ratio could potentially inhibit the ambitious ethylene exports highlighted above, further reducing the cost advantage US ethane crackers currently enjoy over naphtha crackers in Europe.

Whilst Swift remains confident that the 10 projects listed above will be completed, he has noticed a slowdown in the announcement of new projects in the US chemistry industry in general.

“I have not heard of any cancellations” said Swift, “That said, we averaged nine projects announced a month during 2014, now we have only had three project announcements since the beginning of the year [2015]”.

This sentiment is echoed by Bruce Bush, an industry veteran and Executive Vice President of Ethylene Strategies International: “It won’t affect the projects already in construction. Those will still go ahead as planned”. It is the “second wave” of ethane crackers that have been recently announced which may be put on ice.

According to Bush, “we are forecasting that the true consumption of ethylene derivatives in the US will increase by 1% to 2.5% over the next four to five years within the USA.”

Net exports will have to increase dramatically over the next decade to balance the US supply. The key question is whether continued exports are sustainable in light of the falling oil price and uncertainty over global demand.

Despite this decline in domestic consumption between 2013 and 2014, the ACC expects a positive upward trend in both production and spending in the chemicals industry as a whole with industrial production in the US expected to increase by 3.5% over the next five years. 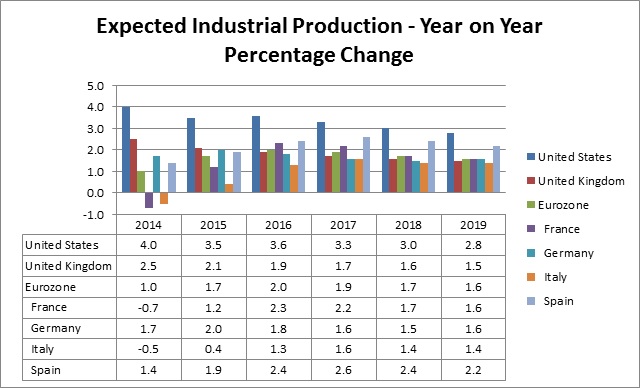 Long term outlook for ethane crackers in the USA

Sasol has expressed confidence in their US ethane crackers’ long-term financial viability. Having already secured 70% of the Louisiana cracker’s ethane supply in contract, the operator is confident that it can weather any tightening in ethane supply generated by low oil prices and the resultant danger of decreased oil production.

Bush is of the opinion that we may see a migration of margins downstream as more ethylene is produced: “There may actually be a point in time where we produce more ethylene than we can consume”. That said “There is a lot of discipline in the ethylene space and if they cut production or shutter some older plants then they could maintain their ethylene margins just as they have for the last 50 years”.

The cost advantage ethane crackers enjoy over naphtha as a result of cheap gas prices may have decreased with the declining price of oil, but experts believe it still offers a competitive edge over Western Europe and Asia.