Amidst the long pipeline of petrochemical projects on the US Gulf Coast racing to bring production on stream early on while controlling costs, BASF, Ineos and other owners are carefully considering their construction methods – modularization or the conventional stick-built – on a case-by-case basis.

BASF, the world’s biggest chemical manufacturer, is considering adopting a modularization approach in its US projects to deal with a potential shortage of craft workers, according to a BASF senior executive.

Stick-built has been the historical standard for BASF projects as they do not operate in remote locations that necessitate modularization, he said. However, due to the heated Gulf Coast labor market, the company is now considering modularization for larger projects, as a way to mitigate construction labor market risks.

The German-based company is building an on-purpose methane-to-propylene plant on the US Gulf Coast, and has expanded a Texas ethylene facility it owns with France's Total Petrochemicals & Refining USA, Inc.

It is also building a 750,000 tpa ammonia plant in Freeport, Texas, with Oslo-based Yara International. BASF will have a 32% interest in the plant, and Yara will have a 68% interest. Total capital investment for the plant is estimated at $600 million.

Yara will also construct an ammonia tank at BASF’s Freeport terminal bringing Yara’s total investment to $490 million. BASF will in addition upgrade its current terminal and pipeline assets at the site.

KBR, Inc. will be undertaking the engineering, procurement and construction (EPC) work for the plant under a fixed-price turnkey contract. The plant is expected to be completed by the end of 2017.

The Port Arthur site produces ethylene, used for anti-freeze, polyester, plastics and pharmaceuticals; propylene, used for plastics, diapers and adhesives; and butadiene, used in the production of rubber and plastics.

The Port Arthur cracker is one of the world’s largest steam crackers, representing a $1.5 billion investment by BASF Corporation and Total.

The cracker turns a wide range of feedstocks such as ethane, propane, butane and naphtha into ethylene, propylene, butadiene and other chemical raw materials.

Over 10 million tons/year of new ethylene capacity by 2019

The current pipeline of petrochemical projects on the US Gulf Coast, the pressing shortages of skilled craft labor, and the race to bring production on stream early on are prompting more and more petrochemical producers to carefully reconsider their construction methods – modularization or the conventional stick-built (onsite) approaches – on a case-by-case basis to save costs and meet budgets.

"The chemical companies will choose the method that will give them the greatest advantage relative to cost and schedule. Large projects will use a mixture of the two," says J. David Taylor, vice president for field operations at S&B Engineers & Constructors Ltd.

In the meantime, eight companies have announced expansions, most of which are already underway. This will add another 4 million tonnes of ethylene by 2018. A number of other projects have been announced, though not yet approved. 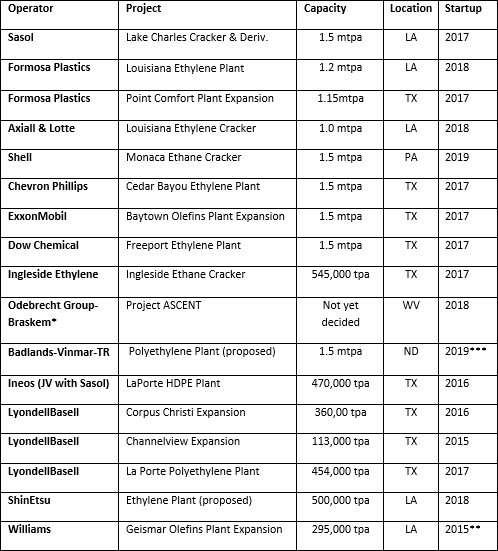 Ineos opts for stick-build in its Gemini HDPE project

Ineos Olefins & Polymers USA has opted for a stick-built a approach to build a new a high-density polyethylene (HDPE) facility in Texas, according to Peter Subtelny, senior consulting mechanical engineer at Ineos in Houston and lead engineer at the Gemini HDPE project.

Ineos has formed a joint venture with Sasol to build the plant, which will be located at Ineos’s Battleground Manufacturing Complex in LaPorte.

“The project will be constructed with a stick-built approach because the licensee of the technology for the plant do not typically modularize their plants and also because the skilled labor in the area is not presently organized to provide modular construction services for components that we need for the facility,” Subtelny says.

The facility will feature the Innovene S process technology licenced from Ineos Technologies and will produce 470,000 tons of bimodal HDPE each year.

The scope of the project includes the addition of new polymerisation, pelletisation, and railcar load-out units, and upgrades to existing utilities and infrastructure.

KBR was appointed to provide EPC services for the project, which uses a cost-reimbursable contract.

Workers will not be located onsite because the facility is surrounded by plants. The facility next door is Total’s polypropylene (PP) plant, the largest of its kind in the world. Instead, workers will live offsite and will be transported into the construction site during working hours.

“The mindset the industry has is that modular construction will be inferior to stick build, and that is not the case,” Subtelny says. “It’s a psychological block that the industry has, particularly in the downstream industry, and I think will shift slowly, it takes time to change the minds of an industry that has done stick build for decades.”